Youthful, hungry and mentality monsters: Why Hearts of Oak and Boadu could dominate for a long time ACCRA, GHANA – A new look Hearts of Oak is already giving off vibes of a formidable force and, under Samuel Boadu, they could dominate for years to come…

Efficient, authoritative and playing some delightful football, Hearts of Oak romped to the Ghana Premier League title in graceful fashion that, even despite ending a decade-long trophy drought, still left the feeling there may be much more to come from the Phobians.

During his unveiling, the 35-year-old promised to do his best to return the club to “where it belonged.” That much had been delivered by the end of his opening game in charge against WAFA.

The Phobians recorded an emphatic 4-0 victory, but more than that their performance was as inspiring as it was endearing. When Hearts pulled off a major coup to prise Boadu away from Medeama in March, his résumé alone was enough to pique interests.

However, no one expected his impact to be this astronomic and swift. Yes, he was on the verge of leading Medeama to the league title – on two occasions, actually – before those seasons were truncated, but he still isn’t superhuman.

In just three and a half months, though, Boadu has managed to transform Hearts from a fragile, disorganised and underperforming team to an energetic, disciplined and clinical unit. He has succeeded in building a solid organisational structure; a well-oiled machine that knows not how to quit.

This is not the Hearts of the late 1990s and early 2000s – winners of the league six times on the bounce, victors in the CAF Champions League and conquerors of the CAF Confederations Cup – with the creative genius of Emmanuel Osei Kuffour and Charles Taylor, and the attacking verve of Bernard Don Bortey and Ishmael Addo.

This team is also less expensive than that of the 2009 league winners dominated by the brilliance of Samuel Affum and a veteran Charles Assampong Taylor.

Boadu’s Hearts, however, is a thoroughly modern team, with technically gifted young players who are hungry for success and mentality prepared to put everything on the line.

The threat of Daniel Afriyie Barnieh’s pace and skill, coupled with the cleverness of Salifu Ibrahim and the physical presence and positional awareness of Kojo Obeng Junior, left many of Hearts’ opponents in their wake during the just-ended season.

Raddy Ovouka, probably the best left-back in the Ghanaian topflight, and the ever-present Benjamin Afutu add to the youthful core that is seamlessly complemented by the experience of skipper Fatawu Mohammed and anchorman Emmanuel Nettey. 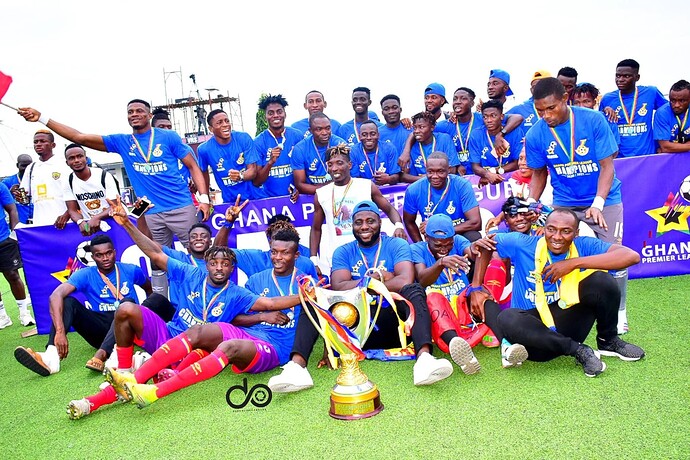 Usually when a team is playing this consistently, then it is made up of players and a manager who have been together for a long time, right? But this Hearts team has romped to the league title using a rare path. And all it took was three months and a half months – and, of course, Boadu.

Melancholia would be an understatement if you try to explain the mood of many Hearts fans in the last decade. Most of them had grown tired of watching their beloved club gravitate away from silverware, year after year since 2009.

Instead of challenging for titles, fan apathy, fueled by the years of underperformance, and instability, caused by a lack of direction by the board, festered an already sinking club.

But to recognise a shortfall is to begin its rectification and that is exactly what was started with the appointment of Boadu. He’s a young, vibrant manager who’s hungry for success. That, exactly, is what he’s built the team into.

The Phobians have become the envy of their rivals. For theirs is a team of youth, exuberance, discipline and players who are ‘mentality monsters’. The most cliché-ish phrase in football is “the end of an era”. For Hearts and Boadu, though, this is the beginning of an era. The last time the Phobians won the league back-to-back was in the 2007-08 and 2008-09 seasons and they have the quality to repeat that.

Make no mistake, Asante Kotoko, Aduana Stars, Medeama and other clubs are going to return strongly next season but, unlike the aforementioned teams, Hearts do not need to change much.

They have, undoubtedly, the best manager in the division; a young squad that can only improve; and just a lethal striker away from becoming unplayable.

As it stands, Hearts’ enemy is itself: if the club can prevent a mass exodus of its current stars, then the potential of this team could be over the roof.

Conquering Africa might be a step too far but this new look Hearts of Oak is already giving off vibes of a formidable force and, under Boadu, they could dominate Ghanaian football for many, many years to come.

When you are hungry for success, nothing has to stop you. When you know that you very life depends on something you make sure you do it well and protect it from slipping away.

That’s the story of hearts of Oak young and vibrant players. With resilience, they can win another trophy for the rainbow team

The hearts of oak team has young energetic men wanting to o Excel their career. This is why they showed resilience in the just ended Ghana premier league by altimately winning the cup

Hearts of Oak this season has played a very delightful football and that’s what has led them to winning the trophy and on the way to win the FA is they emerge winners to the semi finals of the competition, with this current form and the enthusiasm of the player I agree they will dominate for a while