Your D1c.k Is Too Small And I Don’t Feel Anything When You Jump On Me Up And Down Like A Horse – Lady Says As She Dumps Her Boyfriend 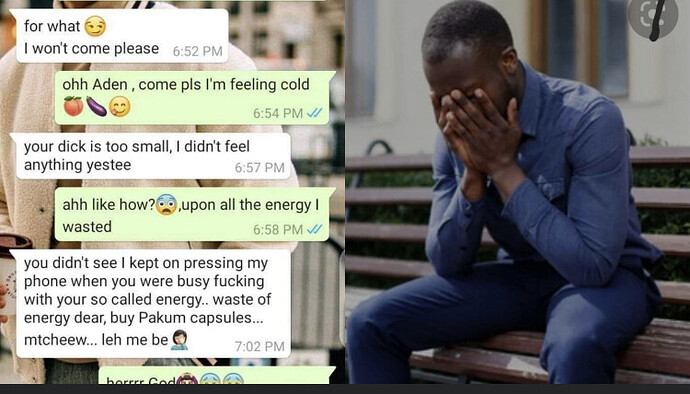 A Lady has decided to dump her boyfriend of several months after realising he can’t satisfy her sexually.

In a WhatsApp chat that was leaked between the two love birds, the guy was ready to have some fun with her.

When the guy quizzed her why she didn’t want to sleep with him, the lady who goes by the name Serwaa responded by saying he wasted his energy on her and didn’t want him to waste his time.

See screenshot of the chat below; 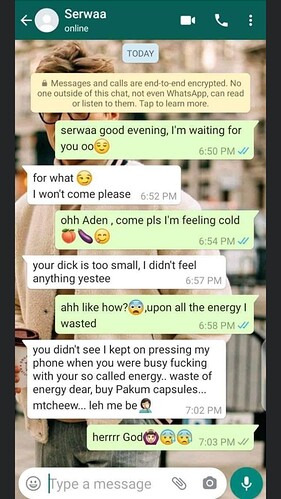 Hmm asem ben koraa ne? It’s not about how big or long it is; can it stand the test of time? Her reasons are meaningless

Buh this thing kraa is not a problem erhh .

hw3 is a problem to some ladies oo

But this is body shaming and it’s a very bad behavior. The guy should just leave her be because it’s only whores who say such things. Weather big all small it’s still a D and they perform the same functions

Sure oo @Curl_Buns . It’s very bad to say that but in this part of the world where penis enlargement creams and drugs are common you hear a lot of ladies saying this. Most Ghanaian ladies are into big Ds when a group of ladies gather this is among the common things they discuss.

yeah that what most ladies are into nowadays oo
off late ladies are tightening their vaginas and men too are enlarging their penises, this world noaa ankasa eno balance

Is very very for the lady to say that , she is disgracing the man .As a dignified lady , she should go to the man and plan how they can solve this issue than condemning him

she is disgracing the man .As a dignified lady

Yeah she’s disgracing the man in public even though the woman has being telling the man over and over again to seek medication but he wasn’t doing that. Now the woman finally deciding to break up with the man should have been done in a nice and polite way rather than exposing and disgracing the man publicly.