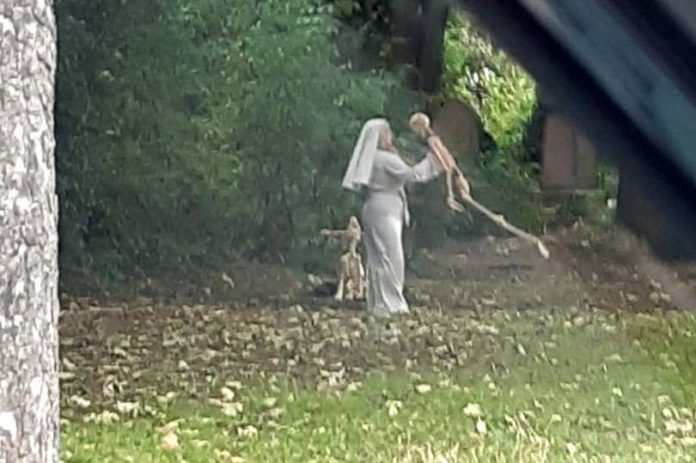 A woman raising a model skeleton was dressed as a nun

A woman, dressed as a nun, was pictured dancing with a skeleton beside graveyard.

A baffled passer-by snapped the bizarre activity which appeared to involve models of a human and dog in skeleton form.

The witness says they were not the only one outside the old Hull General Cemetery to be left confused as other cars also slowed to check they were not seeing things. 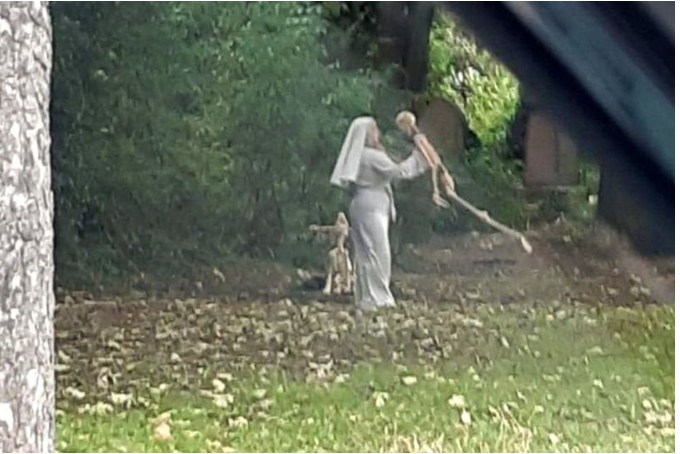 Dressed in a cream nun’s habit and coif headpiece, the woman looked to be joyfully dancing with a model human skeleton and playing with the dog, Hull Live reports.

A startled witness, who took the snaps from a passenger seat, said: “Literally, she stood at the cemetery on Spring Bank West opposite the turn off for Hymers school. She was dancing with a skeleton.” 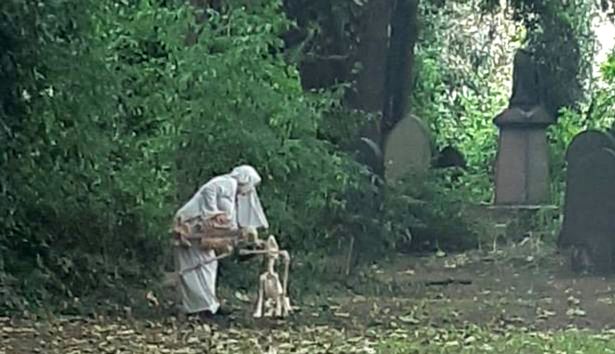 The woman also appeared to have a dog skeleton (Image: Hul

Dressed in a cream nun’s habit and coif headpiece, the woman looked to be joyfully dancing with a model human skeleton and playing with the dog, Hull Live reports.

Maybe she’s doing rituals oo . This is weird but not surp because anything happ now in this world. Scary times.

Imaginable things are really happening in the world now and it seems nothing surprises me anymore. When I see stuffs like this I just say “oh ok” and then move on cos I know you’ll still find some to be weirder then this tomorrow.

I thought things like these happen in Africa only . But it’s obvious the world is coming to an end soon and have to start preparing for worse things than this .

You’re absolutely right. There are so many strange things happening all over the world now and it shows clearly that the world is coming to an end.

Dear, there is witch craft every where waii. Even white people believe and perform more rituals than Africans. For instance, they keeping flowers on a love ones grave regularly, what do you think that is?. They. believe in ghosts and ancestors too.
So we are no different from them

You seem to know more about white people and their witchcraft practices. So can we say witchcraft activities are good . It’s looks like it helps sometimes

We must start getting ready for to fly to heaven oo, or are you going to the other side?

We must start getting ready for to fly to heaven oo, or are you going to the other side?

All this thing happened for a reason
It’s giving us notice that, the world is coming to an end

Or perhaps she’s going insane. There are mad people in developed countries too, I believe.

Imagination everywhere but I hope not in Ghana cuz chale 🏃🏽‍♂🏃🏽‍♂🏃🏽‍♂:joy:

I can’t tell oo @Kwame_Kradi. But to those who believe in it (witch craft) thinks it’s good, so I can’t tell you it’s good or bad it is up to you to decide.