Woman asked to kill baby, husband vanished saying: "Send it back to the devil you got it from" 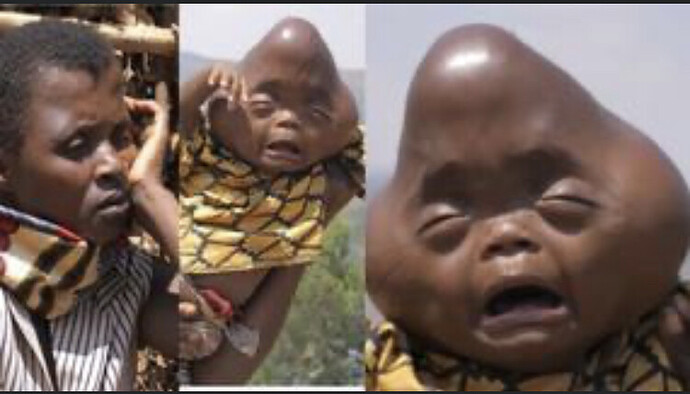 A woman who has given birth to a child with a malformed head has been abandoned by the husband who asked her to “send it back to the devil where she got it from”.

Bajeneza Liberata and her husband shared a lot of love until she gave birth to this particular child who he and others have described as a monster.

She had given birth to other children before and was hoping that the process would be as smooth as the earlier ones.

There was no problem during the pregnancy, so she stayed home until her time was due to give birth and her husband took her to the hospital to be delivered.

However, just like her husband, doctors were surprised to see what Bajeneza Liberata gave birth to.

Her husband angrily denied siring the baby and walked away from the hospital to the surprise of the traumatised wife and never returned.

She was fortunate to have a good Samaritan take her home where she met her other children but her husband had disappeared into thin air.

She was burdened with taking care of the new baby and the other children – their feeding, school fees among other responsibilities while she had no work.

Life in the city became unbearable without her husband’s support, so the poor woman decided to return to her village, leaving her other children to their fate to fend for themselves in the city because she could not afford their lorry fare.

When she arrived in the village, her family only resorted to crying because they had no means to help her.

People have advised her to kill the child but she simply can’t do that because no matter how weird the baby looks, she brought it into the world and cannot kill it.

She is always restless because the child is always crying and she has no idea what is wrong with it.

Afrimax English which made a documentary about Bajeneza Liberata and her baby has opened a GoFundMe account to help seek medical treatment for the baby.

Eeii but what kind of health condition can make a baby like this? This is too bad to watch. Most often, it’s th mothers that are the receiving end of this kind of bad news and predicaments of their kids. See the dispeakable thing the man is saying to his wife.
God bless all mothers. Now you understand why people celebrate mothers more than fathers on such occasions?