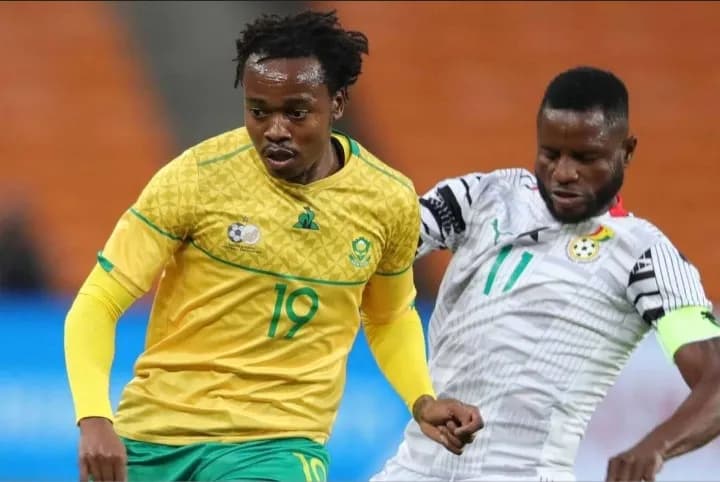 Ghanaians are not happy after watching the 2022 World Cup qualifier between the Bafana Bafana of South Africa and the Black Stars of Ghana at the FnB Stadium in Johannesburg.

After 90+3 added minutes of play, the Blackstars of Ghana were down by a lone goal to nil.

Ghana began the game full of confidence having lost just one of their last five games but played sloppy at the end of the game.

There have been major concerns raised by Ghanaians about the poor performance of the players and their lack of goals.

In the last five games, C.K Akonnor’s men have averaged less than a goal per game, scoring only four goals.

They escaped a defeat in the opener of the World Cup qualifiers by narrowly beating Ethiopia thanks to a long-range effort from Mubarak Wakaso.

South Africa broke the deadlock in the 85th minute with a goal and the referee blew his whistle to end the game after three minutes of additional time.

South Africa 1-0 Ghana, the Bafana Bafana were declared winners against the Black Stars with a goal in their cup.

The loss has angered a lot of Ghanaians who have taken to social media to lambast the Black Stars.

Some suggested the government withdraw all their funds and use it to build the National Cathedral while others just spoke about how bad CK Akonnor has been coaching.

Some suggested the government withdraw all their funds and use it to build the National Cathedral while others just spoke about how bad CK Akonnor has been coaching.

I am not a fan of the Cathedral project but I support this suggestion, starting from the coach.

Who said the coaches are not being paid? Are you saying CK is working for the GFA voluntarily?

Yes. This is a very good idea. Because I don’t know the use of this Black Stars