Will the centre hold in PNC? BY: Albert K. Salia 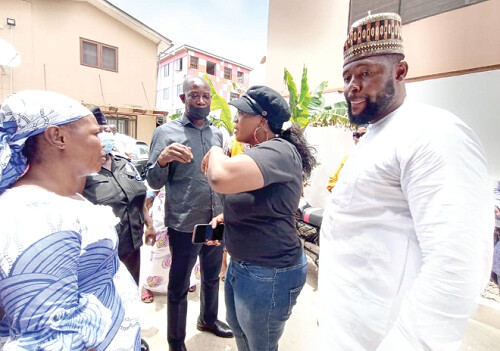 After the elaborate launch of the People’s National Convention (PNC) party’s 29th anniversary and its dinner dance, which attracted other parties, particularly those of the Nkrumaist front, no one expected the party to slide in this fast manner. The PNC is making the headlines for the wrong reasons.

Just last Thursday at the party’s headquarters in Accra, a faction led by the party’s leader, Mr David Apasera, prevented another faction led by Ms Janet Nabla from entering the office premises. The situation resulted in a scuffle, with the police coming in to calm nerves. Sources within the police advised the factions to deal with it through the legal process as the police were getting tired of being called in every minute to prevent clashes at the PNC headquarters.

That might have inspired the leader of the PNC, Mr David Apasera and the national chairman, Mr Moses Dani Baah, to file a suit at the High Court last Thursday, asking the Court to, among other reliefs, declare the Kumasi NEC meeting null and void; restrain Ms Nabla from holding herself as General Secretary of the party and the Greater Accra Regional Chairman of the party, Mr Bala Maikankan, from holding himself as the acting national chairman of the PNC and the two having anything to do with the PNC national office at Abavana Junction, Pig Farm in Accra.

Ostensibly, within a spate of one week, there have been two National Executive Committee (NEC) meetings involving the two groups.

Either faction has described the other group’s NEC meeting as illegal because there was no quorum, neither was it properly constituted.

In one breadth, the General Secretary, Madam Janet Nabla, was declared suspended indefinitely by the Accra NEC while the Kumasi NEC also announced the removal from office of the leader of the party, Mr David Apasera, and the national chairman, Mr Moses Dani Baah.

As things stand now, the centre is not holding in the PNC and the founder of the party, the late Dr Hilla Limann, will be weeping in his grave.

But I believe that if the party had systems and structures in place, the differences could have been resolved within the party. I attribute this more or less to immaturity and greed on the part of the two factions. Nobody wants to let go of their ego.

Such is the sad situation that it appears the factions do not want to listen even to the Council of Elders after its chairman, Colonel Luri Bayorbor (retd), called for a ceasefire on the media front. Some have even labelled him as a sycophant.

The only option is for the party to call for an emergency congress to elect new leaders who the party faithful believe can work for the good of the party. The delegates must also review its constitution to properly spell out the grievance addressing system to ensure that the procedures and processes are well laid out.

As it is now, any group can call for a meeting and declare a position. I was expecting the Regional Chairmen to have met to outline measures to resolve the internal wranglings within the party. Sadly, it appears they have taken sides.

It is obvious that the centre is not holding in the PNC and the earlier the parties smoked the peace pipe, the better.

After all, these were personalities who seemed united to remove its former chairman, Mr Bernard Mornah, in order to reshape the party.

But the heat for the 2024 general election more than three years away is already gathering momentum. Interestingly, the political parties are yet to organise internal polls to elect constituency, regional, national executives and presidential candidates.

However, it appears the battle slogan for the 2024 elections has already been adopted – “Break the eight-year cycle” or “Do or Die”.

While the New Patriotic Party (NPP) is seeking to break the two-term presidency of political parties in government since 1992, the National Democratic Congress (NDC) is asking its followers to do all they can to stop the NPP government from going beyond the ‘traditional’ eight years.

The argument of the NPP is that President Akufo-Addo has done exceedingly well in improving the livelihood of Ghanaians through the social intervention programmes such as Free Senior High School; One District, One Factory; Planting for Food and Jobs; and One Village, One Dam, among others.

But the NDC believes the Akufo-Addo government has scammed Ghanaians into believing that their lives were being improved because there is high unemployment, corruption and economic mismanagement.

Indeed, there has been press conferences and counter pressers by the two major political parties to justify their claims this week. The issues have centred on the tenure of the administration of both the NPP and the NDC, especially regarding the management of the economy and which party has managed it better.

In all of these arguments, the voter, especially the floating voter, is quietly monitoring and listening to assess the situation.

The bottom line should, therefore, be communication and appropriately convincing the electorate to vote for either party. As it is now, the choice in 2024 will be between either the NPP or the NDC.

We still do not have a third force in our political terrain and considering the confusion engulfing the People’s National Convention (PNC), the minor political parties will have to merge their splintered fronts into one party to pose a challenge to the duopoly of the NPP and NDC.