Will I use sex to restock? – Phone seller asks Linda who wants to buy iPhone 11 with small cash & sex 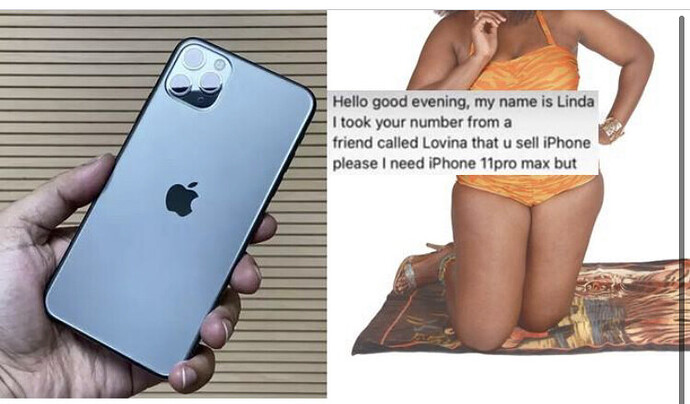 An angry, mobile phone dealer has rejected an iPhone-obsessed lady’s offer to [make part payment for the gadget and defray the rest of the cost with ten rounds of sex.

Will I use the sex to restock? – Phone seller blasts Linda who wants to buy iPhone 11 with cash & 15 rounds of sex

The lady who identified herself to the phone seller as Linda said she wanted to buy iPhone 11 Pro Max but her money was short, so she wanted to top it up with kind payment.

In a leaked WhatsApp conversation with the phone seller, she revealed that she got his contact details from a friend of hers.

According to the Nigerian lady, she had only N150k to buy the phone but was prepared to give the vendor good sex up to 10 times in addition to the money.

Hilariously, when the man expressed surprise at the offer, she thought he was interested, so she went ahead to increase the number of times to 15 if he would add “Airpods” to the iPhone.

It appears the phone vendor got pissed off but did not want to express it, so he chose to ignore the lady’s message. She however insisted on getting a reply from the man.

As she kept pestering him with more messages and insisted that he reply to them, the angry man cursed her, asking if he could restock with the numerous rounds of sex.

He then took to social media to share the screenshots of the conversation between him and the desperate lady. 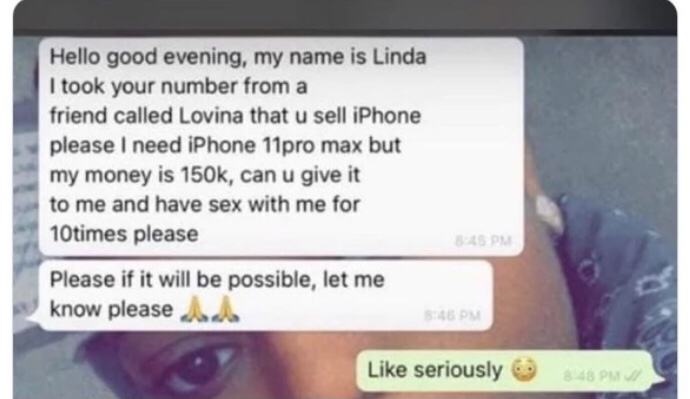 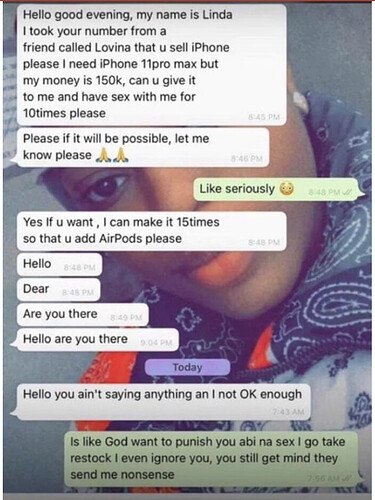 What was she thinking? This guy is a smart one. Congrats to him for such an escape

. The guy is smart and strong hearted paa because some other guy would have agreed and would have continued sleeping with her through threats. I salute this guy​:joy:

Hahaha, it’d take an idiot not to see this is a setup. Kudos to the guy though for not falling for this bullshit.

How could you. I used to believe that every woman was a queen. Queens don’t act like this.