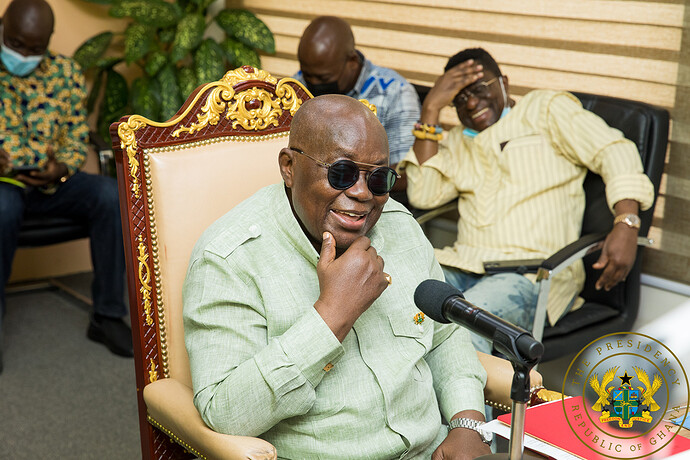 The President, Nana Addo Dankwa Akufo-Addo, has reassured the people of the Oti Region that the government will construct a bridge over river Oti before he completes his tenure.

"I am determined, I made a promise and I am going to see to it that it’s done. If you talk about legacy, this is going to be my legacy for the region,” he added.

In line with that, he said the Ministry of Finance had already granted a mandate letter to a Dutch company to begin the 1.6-kilometre bridge before the end of the year.

The President gave the assurance during a meeting with some chiefs in the region as part of his two-day working visit to the Volta and Oti regions.

The river takes its source from the Northern Region, and the bridge will be constructed over a section of the river at Dambai to improve turnaround time for passengers and traders.

When a traveller mises the boat, you have to make a long winding detour of about 5 hours in the case of Kete Krachi.

Currently, a ferry boat, “Freedom and Justice”, which replaced an old one in 2012, shuttles between one end of the Dambai section to the main land.

It takes about 15 minutes to cross the river with the ferry boat, while other boats use about 30 minutes minimum.

Following complaints by the chiefs about lack of potable water and erratic electricity supply which they said were affecting their standard of living, President Akufo-Addo said a water project at Dambai would soon start to bring an end to the crisis.

He said the government was also considering the construction of a new power station at Bimbilla to supply regular electricity to that part of the country for accelerated development.

President Akufo-Addo, however, stressed the need for national unity and called for the support of the people in the region, saying with truth, integrity and hard work, the country would move forward.

My brodas this man is liar

@Jacobkuv are you surprised he’s not done it, you shouldn’t. Politicians will make you need them always. They will impoverish you and pretend to come helping so they can get favors like votes and other nodes. How long will it take to construct a bridge, from 2016 till now.

Yes bro , @Riyadh . The sod cutting party is even more expensive than the project itself because , in most cases, the projects never materialize. This is how our leaders lie and abuse the system but some of us still support them