Walking is generally considered a great exercise but the belief that one must complete 10k steps every day, is not entirely true, say experts 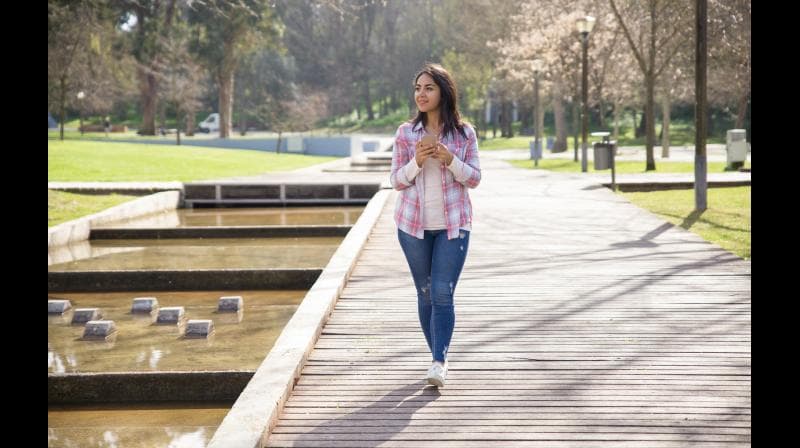 When it comes to being fit and healthy, it’s a common belief that walking 10,000 steps per day will do the trick. It can be a frustrating target to achieve, especially in the current work-from-home scenario.

Do we really need to walk that much, or can the same level of fitness be achieved by doing less? We check with experts.

According to Dr. G.N. Sumanth, Chief Physiotherapist, Yashoda Hospitals, Hyderabad, “Walking for 10,000 steps per day for fitness or weight loss is an old marketing myth promoted by a Japanese commercial pedometer company in the 1960s.” He says, from a research point of view, taking 7,500 steps per day is beneficial; walking more doesn’t throw up any additional benefits. “According to studies, our body compensates for the extra energy that we burn through exercise, and increases our hunger signals so that we tend to eat more,” he says, adding, “the relationship between walking and weight loss is not as straightforward as people may think. Hence, walking 10000 steps a day is not a hard and fast rule for shedding weight.

Dr. Sumanth feels a proper diet plan and the pattern of exercise (intensity, time, and type of exercise) are key. “According to the American College of Sports Medicine, a minimum of 150 minutes per week (30 minutes per day, 5 days a week) of physical activity is recommended for a healthy life,” he adds.

Rasheed Khan, a fitness expert, says, walking 10,000 steps burns at the most 300 to 400 calories. He feels it would be more beneficial to follow a 30-45-minute workout routine focusing on muscles and different body parts according to individual requirements.

Leena Roy, marathoner, Yogini, and fitness coach, stresses that exercising is important for every individual but is based on individual capacity. “In today’s world and especially during this pandemic, every person is going through some sort of stress, be it physical, mental, or emotional. Mandating 10,000 steps a day on top of this will impact our body in some way, either short-term or long-term,” she says. She recommends that on days when the body cannot take it, don’t forcibly exercise, rather, take it lightly. “But that should not be the reason not to exercise, or stop exercising,” she cautions.

Recent scientific studies suggest that we do not need to take 10,000 steps a day, equivalent to walking 8 kilometers, which is impractical on a daily basis, says Dr. Ashutosh Shukla, MD, FACP, Senior Director & Medical Advisor, Max Hospital, Gurgaon. “Last year, a study conducted on 5,000 middle-aged men and women found that 10,000 steps a day are not required for longevity. The study also found that people who took about 8,000 steps a day were half as likely to die prematurely from heart disease or similar causes, as those who did only 4,000 steps a day,” he says.

According to recent estimates, most adults average fewer than 5,000 steps a day. Most authorities use time, not steps, as the yardstick for recommending exercise, and suggest that we exercise for at least 150 minutes a week in addition to movement normal in our daily lives, Dr. Ashutosh says. “Translated into steps, that would be a little over 16,000 steps a week, or 2,000 to 3,000 steps a day. If we currently take about 5,000 steps a day during everyday activities, adding the extra 2,000-3,000 steps would add up to 7,000-8,000 steps.”

However, fitness expert Dinaz Vervatwala has a different approach towards the 10,000 steps concept. “Most people lead sedentary lives. If they follow the concept of the 10k steps, it will get them moving, and also motivate them to keep track of what’s going on with their bodies,” she says.

Agreeing with Dinaz, Sana Chawla, gut health coach, feels walking is the most underrated activity in the health arsenal. “It facilitates neuron growth, circulates blood, decreases cortisol, strengthens tendons and ligaments, and stabilizes blood sugar levels. For decades,10,000 steps have been a target number.” Sana also feels that exercise alone is not always the most effective way to lose weight, though if you track steps, it might have the benefit of increasing physical activity overall.