Viral Our Day: How 9-year-old Oswald captured the hearts of big brands with just a note 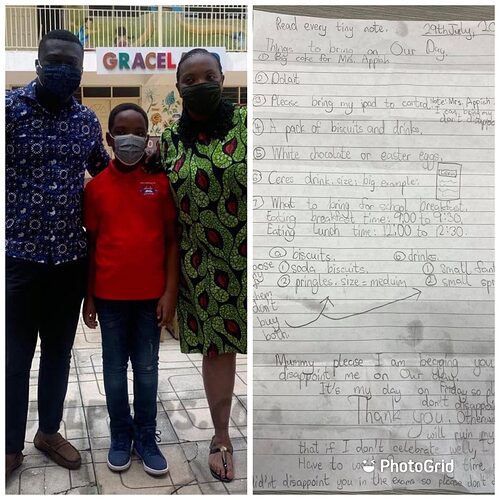 Nine-year old Oswald Gennuh was expecting a very nice “Our Day” package from his parents, as per his note to his mom.

However, he did not dream, that his rather detailed note would catch the attention of many on social media.

Oswald, a student of the Christ Ambassadors school in Dansoman, wrote a seven-point note to his mom on what he expected on his big day.

According to Oswald, in his own words, he had not disappointed his mom in his exams and was expecting nothing less from her.

“What motivated me to write the letter was because I wanted my mom to ‘really really’ buy it and not forget, because usually when I tell her to buy something she forgets it,” Oswald told Joy News.

Oswald’s note was shared on Twitter by user called @SmylyThe3rd, who works with one of Owald’s parents.

The note went viral and has since captured the hearts of big brands in Ghana who want to be a part of Oswald’s big day.

Media houses including Joy FM, Pulse Ghana, are giving Oswald and his classmates free coverage, while food brands like KFC Ghana, Dominos Pizza, Pizza Hut and a host of others are delivering mouth watering meals to him and his colleagues.

Notwithstanding, Oswald has received packages from Access Dental, Ashesi University and a host of others.

I can’t stop smiling. This guy is just smart and intelligent. He has won the hearts of many with just a piece of note. Am thrilled

Keep moving bro…and study hard u have a promising future.