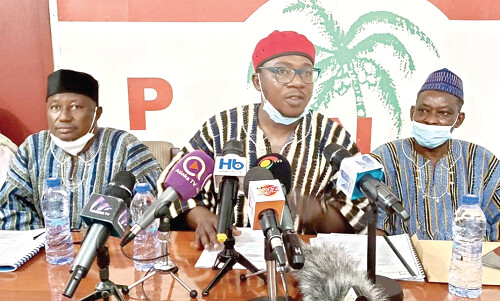 The seeming standoff within the People’s National Convention (PNC) has reached a boiling point, with the leadership of the party giving the “suspended” General Secretary of the party, Ms. Janet Nabla, a one-week ultimatum to vacate her office and hand over to the party’s National Treasurer.

Consequently, the party said it had appointed a Deputy Youth Organiser of the party, Mr. Prince Agyeman-Duah, to act as General Secretary with immediate effect.

At a news conference addressed by the National Communications Secretary of the PNC, Mr. Awudu Ishaq, in Accra, the party said it had officially communicated its decision to Ms. Nabla and had commenced processes to enforce her suspension.

“Within this one-week period, she has the leeway to access her office but beyond that period, she will not be allowed any further access to the office. She’s creating the impression that she’s been coming to the office because her suspension is null and void. Let’s see what happens on the expiration of her one-week honeymoon period,” Mr. Ishaq said.

The leadership of the PNC and Ms. Nabla have been embroiled in fierce disagreement following an announcement by the party last Saturday that Ms. Nabla has been suspended for “gross misconduct, incompetence, and insubordination.”

The party said the decision was taken after an emergency National Executive Committee (NEC) meeting held at the GNAT Hall on Saturday, August 28, 2021.

Briefing the media on the circumstances that led to the party’s decision to suspend the General Secretary, Mr. Ishaq explained that the NEC acted on a report by the party’s Disciplinary Committee which recommended Ms. Nabla’s suspension after she had failed to appear before it to respond to some issues that had been leveled against her.

“The constitutional provision under Article 45 of the PNC constitution was duly met and as such all decisions are taken at that meeting, including the indefinite suspension of Ms. Janet Nabla, are valid and binding,” he said in response to criticisms that the NEC’s meeting did not form a quorum.

In a separate interview with the Daily Graphic immediately after the press conference, Ms. Nabla disregarded the party’s ultimatum and resolved to fiercely resist any attempt to remove her from office.

“I have rather given the leader and the National Chairman a one-week ultimatum to vacate their offices because they are not fit to be there. I will come to my office tomorrow as the General Secretary and no one can stop me,” she said.

Ms. Nabla maintained that the NEC’s decision was void and pledged to fight the decision tooth and nail.

There was a heavy police presence at the party’s headquarters during and after the press conference, with about 10 police officers stationed at vantage points, including the conference room.

The party confirmed that it invited the police to provide maximum security to maintain law and order and forestall clashes.

In spite of the heavy security, the Greater Accra Regional Chairman of the PNC, Mr. Bala Maikankan, succeeded in briefly disrupting the press conference after he had stormed the conference room.

In another incident, Ms. Nabla, in the company of Mr. Maikankan, stormed the party’s headquarters after the press conference but was denied entry by the police.

Ms. Nabla was heard explaining to the police that she had come to the office to take some documents, but the police advised her to leave to avert any confusion and she obliged

Waaa look, they won’t look for a way of building back their already fallen and broken party; they are fighting instead. How can these people say they are a politcal party, with how many members nationwide? Ec is to blame for all these dysfunctional parties