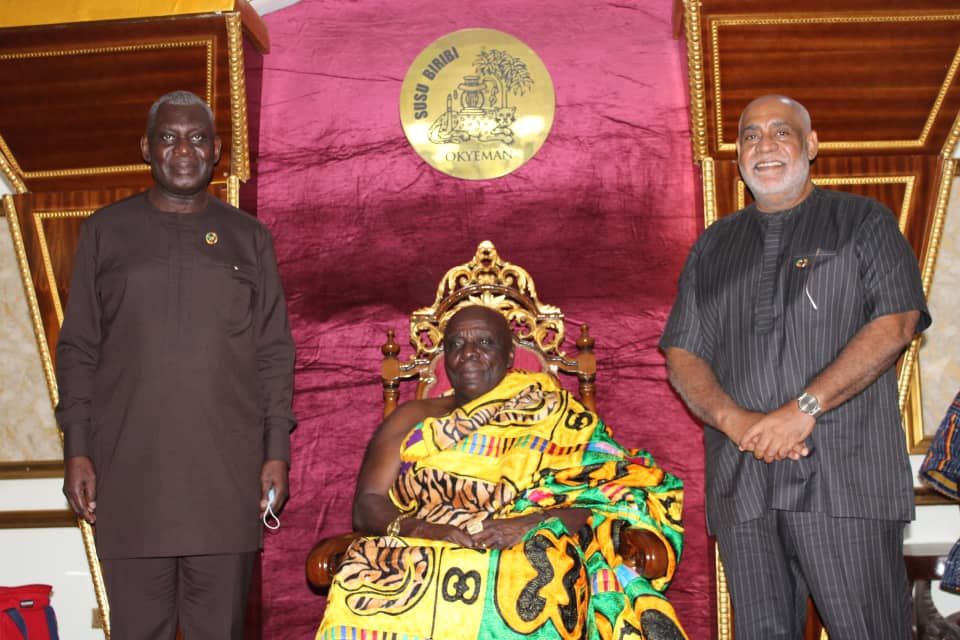 The United Nations (UN) in partnership with Okyeman Environmental Foundation (OEF) has begun initiatives to restore vegetation at degraded mining sites, as well as other critical Sustainable Development Goals (SDGs) challenges in the Akyem Abuakwa State.

The UN envoy in Ghana secured $1m grant from the UN Human Security Trust Fund, and an additional $1.3m co-funding from five UN agencies to undertake the three-year project that will address multiple development issues facing Okyeman and provide an impetus to sustain the process.

“UN Agencies (UNDP, UNICEF, WHO, UNEP and UNV), together with OEF, have been working jointly to develop a multi-sectoral programme that addresses multiple interconnected challenges in the Kingdom. Core areas of focus are environmental, health and education with strong livelihood and empowerment component,” he said.

As part of the project, Mr Abani indicated that three million trees would be planted over the next three years under the environmental component to restore degraded landscapes and create awareness on the best agroforestry practices, as well as complement Okyenhene’s vision to plant 25 million trees by 2024 in the Akyem Abuakwa State.

The project, according to him, would also provide “alternative livelihood and jobs, strengthen local institutions to monitor the environment, protection against illegal mining, strengthen the educational system, and clean the contamination in water bodies affected by the use of cyanide and mercury”.

He added that they are key components in the environmental-related SDG goals as well as poverty-related goals which target “no poverty, zero hunger, good health and well-being and quality education”.

Over the three-year span of the project, the UN Resident Coordinator said over 1.3 million people across five districts would benefit from the project with provision of alternative livelihood, jobs and sustainable living; with over half a million being women as well as children between the ages zero to 14 years.

He affirmed that the UN and its Agencies would partner the OEF, traditional authorities, government and the private sector to safeguard the environment, maximize the tourism potential of the Eastern Region and ensure good health and education outcome for the people.

The Okyenhene expressed worry over the excessive centralization of development policies which has over the years relegated traditional authorities and local folks.

He said local participation in policy formulation processes and implementation would help in the development of communities as the policy ownership would be in the hands of local folks.

He lamented the impact of environmental degradation due to mining across the country, noting that Ghana’s mining activities for over 100 years has not met the country’s needs; but rather contributed to the loss of vegetation and livelihoods.

The Okyenhene indicated that the massive insurgence of microbial diseases across the world has been due to the destruction of vital vegetation and water resources. Such occurrences he said, can only be tamed when people begin to respect nature.

He appealed to Ghanaians to develop respect for nature and preserve it for the sustainability of future generations. He expressed gratitude for the project; and urged the leadership of OEF to effectively support the project to yield the desired output.

The Head of SDGs Advisory Unit at the Office of the President, Dr Eugene Owusu said the destruction of water bodies and vegetation has been existent threats to climate; hence, the need for such timely projects to help address climate change.

The involvement of traditional authorities and grassroots in the project, he said, was part of the core agenda in the national transformation policy the government has begun as part of the Green Ghana campaign to help preserve the vegetation and water bodies.

He called on Ghanaians to join hands with the government in its pursuit to eradicate all challenges confronting the SDGs by desisting from the destruction of lands and indiscriminate tree felling.