Top US, UN officials head to Ethiopia to press for Tigray aid 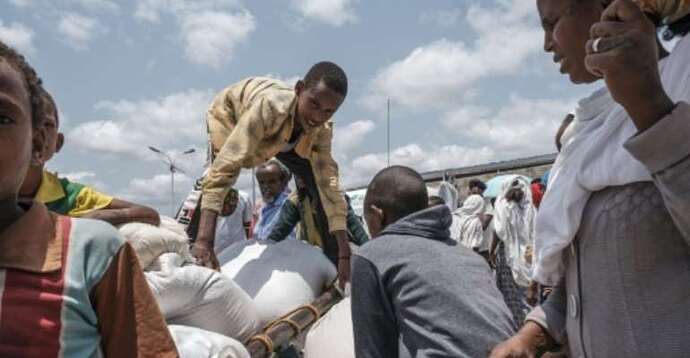 US aid head Samantha Power and the UN humanitarian chief will hold talks in Ethiopia to press for urgent access into conflict-battered Tigray as fears grow that millions face famine, officials said Thursday.

Power will meet officials in Addis Ababa to “press for unimpeded humanitarian access to prevent famine in Tigray and meet urgent needs in other conflict-affected regions of the country,” the US Agency for International Development said in a statement.

Power will also travel to Sudan on her trip starting Saturday as Western nations seek to support the civilian-backed transitional government after decades of authoritarian rule, USAID said.

The United Nations has warned that food rations in the Tigrayan capital Mekele could run out within days if more aid is not allowed in.

Some 5.2 million people – more than 90 percent of Tigray’s people – depend on outside assistance, according to the UN.

All available routes into Tigray are impeded by restrictions or security concerns following an attack on a World Food Programme convoy earlier this month.

Martin Griffiths, the new UN under-secretary-general for humanitarian affairs, arrived in Ethiopia on his first trip since taking the job.

Over six days, he will both meet Ethiopian officials and travel both to Tigray and the neighboring region of Amhara, whose fighters control parts of Tigray.

“He looks forward to constructive discussions on scaling up the humanitarian response across the country,” UN spokeswoman Eri Kaneko told reporters.

Griffiths will speak with civilians and also “witness first-hand the challenges that aid workers face,” she said.

Ethiopian Prime Minister Abiy Ahmed, who had won the Nobel Peace Prize for reconciliation efforts, in November launched an offensive in Tigray in response to attacks by the region’s then ruling party against federal army camps.

The war took a stunning turn last month when the forces of the Tigray People’s Liberation Front took back Mekele, with rebels then launching a new offensive to capture other parts of the region.

Secretary of State Antony Blinken has described some of the violence in Tigray as “ethnic cleansing” and repeatedly pressed Abiy by telephone, straining the usually warm US relationship with Ethiopia.

In another growing area of concern, the State Department on Wednesday urged armed groups in Tigray to stop targeting refugees from neighboring Eritrea – who have long crossed the border to flee their authoritarian government, which allied with Abiy in last year’s campaign.

Power, a former journalist who held senior positions under former president Barack Obama, is known for her advocacy of humanitarian concerns and often reflects on the failure to prevent the Rwandan genocide in 1994.

Power will also meet in Sudan with Ethiopian refugees who have fled the conflict and travel to Darfur – the parched western region where a 2003 campaign against the African ethnic minority was described as genocide by Washington.

Sudan’s civilian prime minister, Abdulla Hamdok, has sought to end the vast nation’s myriad conflicts including in Darfur although renewed clashes have killed hundreds of people in recent months.

Power will meet Hamdok as well as the military chief, General Abdel Fattah al-Burhan, who remains leader of Sudan’s transitional ruling body as the country prepares for elections in 2022.

Power will “explore how to expand USAID’s support for Sudan’s transition to a civilian-led democracy” and deliver a speech in Khartoum about the transition, the agency said.

Hmm so Africa, until when, this war and killing amongst ourselves us the reason the west will always look down on us. We don’t love ourselves. Somalia is a disgrace to its people and Africa. Thanks to the UN Officials who are bringing food and other aids for famine areas in Somalia