Cockroft, 29, bettered her own record with a time of 16.39 seconds to overhaul team-mate Kare Adenegan , who took silver ahead of Australia’s Robyn Lambird.

Rowles and Whiteley, who are also the reigning world and European champions, won by 4.86 seconds from the Netherlands, while China took bronze.

Defending champion Will Bayley, who, like Steadman, is a former Strictly Come Dancing contestant, had to settle for silver as he was beaten by China’s Yan Shuo in the table tennis men’s singles class seven - losing 3-1 in the final after taking the first game.

In judo, GB are guaranteed two medals with Elliot Stewart in the men’s -90kg gold-medal contest and Chris Skelley in the -100kg gold event later on Sunday.

And the GB wheelchair rugby team take on the USA at 10:00 in their gold-medal match.

Wheelchair racer Cockroft, a 12-time world champion, increased her impressive collection of Paralympic titles in style, following her treble in the 100m, 400m and 800m events at Rio 2016.

And though Adenegan, who clocked 17.03, made the faster start, Cockroft overhauled her fellow Briton.

“This last 18 months has been so weird and so, so hard. I just wish the stadium had been full to witness that,” Cockroft told Channel 4.

"It’s so special. It just feels like a massive, massive relief. We didn’t know if we’d be here in Tokyo. I was so nervous. I did everything I could and thankfully it was enough.

“I know Kare is a strong starter. She’s always good off the gun so I knew I had to let her go and take my time.”

On aiming for the 800m title next, she added: “The 800m is my comfortable event now. I am confident but it’s all to play for.”

At the Sea Forest Waterway, Whiteley marked his 30th birthday with a second Paralympic title alongside Rowles as the pair built steadily through the race.

“We did what we set out to do,” he said. “We knew they’d go out quick, but we knew we’d come back at them six minutes later. We have absolute confidence and a lot of trust.”

Rowles, 23, said that she had faced huge challenges since winning gold five years ago.

"The pressure of performance sport just took me away from what’s important in life, and that’s being happy. 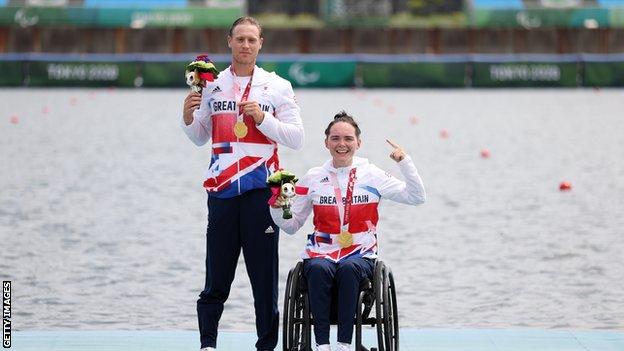 Whiteley and Rowles are the world, European and Paralympic champions in their event

"To be the happiest person I’ve ever been crossing that line, I don’t think this performance would ever have happened if I’d just kept pushing through and just kept battering myself and not overcome the anxiety.

“We’ve stuck by each other throughout and backed each other and I’m grateful to Laurence for letting me do that.”

The four continued GB’s dominance in the event with the last loss coming at the 2010 Worlds.

“We are incredibly tough on ourselves, we are always pushing the standards, complacency is not an option for us,” said Fox.

“There’s been a lot of hard graft. I’ve had hip operations and several injections to get myself here but I’m so happy to be a part of the GB success.” 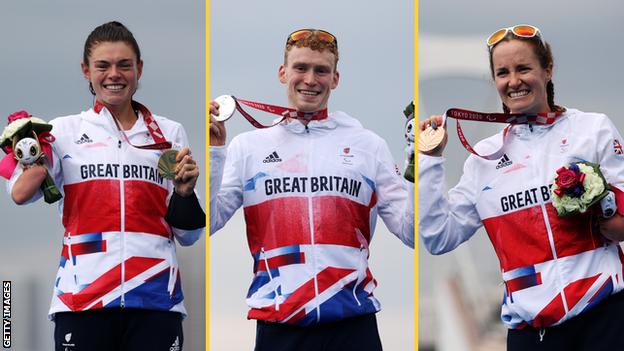 Victory in the women’s triathlon was redemption for Steadman, who had to settle for silver in the PT4 triathlon at Rio 2016 after a costly mistake during the swim as she missed a crucial buoy.

She made no such error in Tokyo, however, finishing in one hour 4.46 seconds - 41 seconds ahead of the USA’s defending champion Grace Norman - with Cashmore two minutes and 50 seconds behind her compatriot.

American Norman led after the 750m swim but Steadman swept past her rival on the 20km bike and established an 18-second advantage which she extended in the final 5km run.

Cashmore was able to claim bronze despite receiving a one-minute penalty for a drafting violation. That was served during the bike segment, however there was confusion as the race officials initially got the duration wrong.

“It’s a bronze medal. I can’t be disappointed, but I am,” an emotional Cashmore said. “Each race I’m progressing and learning. I’ve learned a lot today and I’ll never do something like that again.”

In the men’s PTS5, Peasgood took the lead in the swim but was eventually caught by Germany’s Schulz midway through the run section and eventually finished 45 seconds behind, with a 27-second gap to bronze medallist Daniel Stefan of Canada.

Peasgood, who will also compete in the road cycling events for GB in Tokyo, said: “I’m pretty overwhelmed. I didn’t think I could do it on the bike. I just dug deep on the run and that’s what I’ve been training for.” 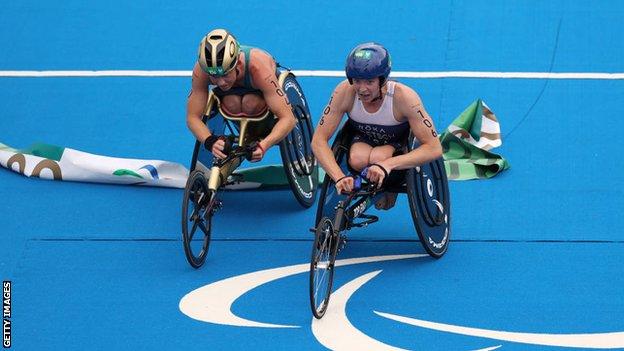 There was a dramatic conclusion in the women’s PTWC triathlon, as the USA’s Kendall Gretsch, 29, narrowly edged out Australia’s Lauren Parker in a sprint finish.

Gretsch, who won two Winter Paralympic golds in skiing at Pyeongchang in 2018, officially won by 0.01 seconds as she overtook Parker on the final straight.

In the men’s PTWC event, the Netherlands’ Jetze Platt secured consecutive Paralympic golds after his success when the sport made its debut in Rio.

Unbeaten in triathlon events since 2016, Platt is also targeting a handcycling medal when the road cycling events get under way.

Over in the athletics, there was an eventful conclusion to the men’s F40 shot put. Iraq’s Garrah Tnaiash produced a world-record throw of 11.15m, only for Deni Gnezdilov of the Russian Paralympic Committee to beat him by one centimetre with his final effort.

The 34-year-old was more than 12 seconds ahead of Australian Erik Horrie, who earned his third successive silver, while Britain’s Benjamin Pritchard - left paralysed after a cycling crash in 2016 - finished fifth.