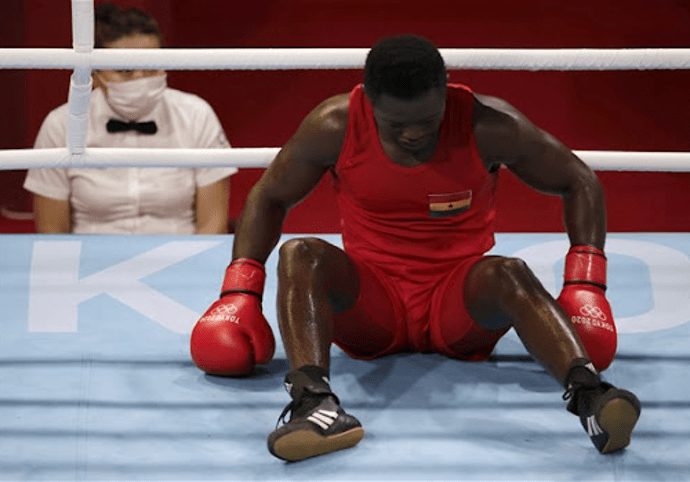 Ghanaian Boxer, Shakul Samed, has apologised to Ghanaians for his early exit in the Round of 16 of the Light heavyweight category of the Men’s Olympics boxing.

The round of 16 bout was a competitive brawl until a right hook from Malkan sent Samed reeling and onto his backside.

Four of the five judges scored the first round in favour of Malkan and he looked set to win the second round as well until his right hook ended the bout prematurely.

The referee, after determining that the Ghanaian was unfit to continue, ended the bout with 1:23 seconds left in the second round.

The 22-year old says he is disappointed about his exit but insists he gave his best.

“I am disappointed but what happened in the ring was not my fault.” He said

“I want to apologise for not fulfilling my promises, but I know I gave my best in the bout. If you watched it, you will see I fought like a hero.

“I however still have hope that my two brothers ( Sulemanu Tetteh and Samuel Takyi) can bring back home a medal because if they win, I also win.”

His exit leaves only two Ghanaian boxers remaining in the games after Black Bombers captain, Sulemanu Tetteh qualified to the Round 3 stage on Monday, while Samuel Takyi progressed to the quarterfinals on Wednesday.

We accept his apology, but I agree it’s not his fault, Joseph agbeko this afternoon explain the difference between the Olympics bout and the amateur bout… so we are just hopeful we win a medal because it’s not easy.The remaining 2, looks promising

Shakul ate too much Banku and fufu before that fight. See how the Turkish boxer beat you blue black. You are so the first casualty from Ghana at the Olympics. Myself I can beat in a ring, no joke.

Hahaha, what is the apologizing for? You did what you could and its a game. You don’t owe Ghanaians any explanation. Hope you recover soon and bounce back on your feet. Better luck next time.