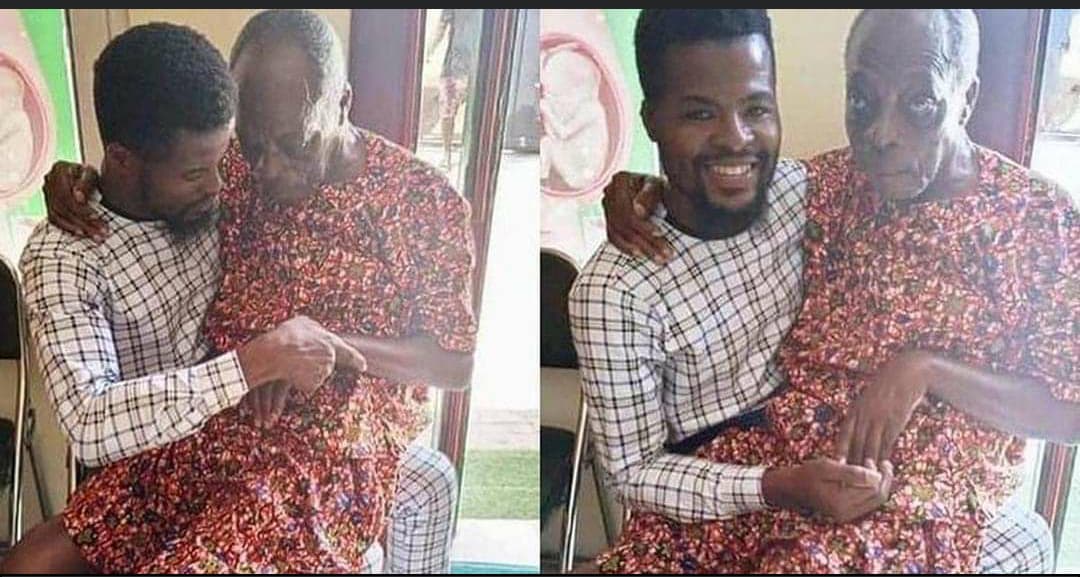 Photos of the sad state of veteran Ghanaian actor Kofi Laing, known in showbiz as Kohwe, who looks ill have popped up on social media.

The comic actor who is known for his role in the Ghanaian colonial concept sitcom “District Colonial Court” has been an inspiration to the new crop of comic actors.

However, his current state doesn’t paint a good picture of his highly recognised legacy.

On Friday morning, photos of him looking lean and suspected of suffering from stroke popped up on social media.

The photos show stricken Kohwe sitting on the laps of an unidentified young man.

According to some users on Instagram, he is currently receiving treatments at Dr Power Herbal Centre Hospital – a herbal hospital located in Accra.

His family are yet to issue a statement addressing his current state.

In 2019, he told The Spectator that people shouldn’t wait for him to die before they pour out tributes to him.

He urged leaders of the country and the public to care for the plight of old actors who through their gift brought laughter and eased tension in many homes.

According to him, what they did cannot be quantified, considering the positive impacts it brought in many homes and the country as a whole.

He said some of his colleagues died as paupers because there was no assistance from anywhere.

For him, in their days, the movie industry was not rewarding in monetary terms, and it was against that backdrop, those in the helm of affairs must care about their plight in old age.

Kohwe said it was unfortunate that when they are in need, they were left to their fate, adding that the worst of the maltreatment was that they were always denied movie roles to fend for themselves.

“Don’t wait for me to die, before you pay glowing tribute to me for my wonderful contribution, your tribute will be meaningless because it will not bring me back to life,” he said.

He said now that he was alive, if there was any support, it was time to locate him and put smiles on his face rather than to wait for him to die before doing so.

It’s really saddened my heart when I saw Kohwe’s state. I hope he gets well soon

Better is the end of a matter than its beginning;

We have failed as a country in bettering the lives of renowned persons as they live their last days.