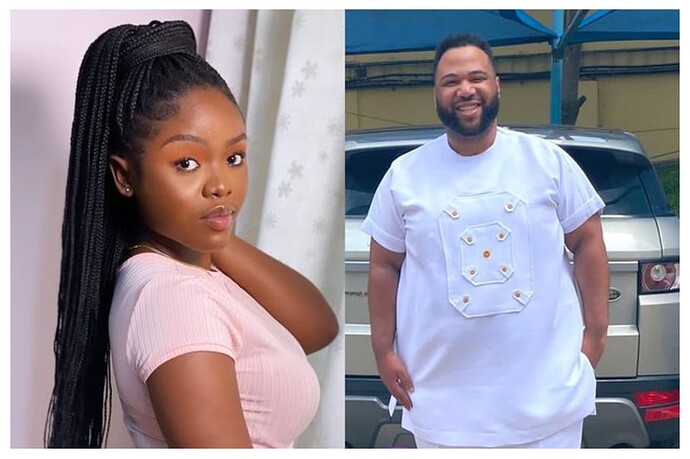 Gyakie has become phenomenal after bursting into the mainstream with her ‘Forever’ song which has become an anthem across the length and breadth of the country and several other African countries.

Deewills in a new post on his social media platform asked the sensation singer to his heart out of his chest because they belong to her. Gyakie is yet to respond to his message but it would be intriguing how things might unfold if she replies

image770×151 55.8 KB
Deewills rose to prominence on the internet, not on the wings of his father’s influential personality but on his own accord via controversies and beefing his father online.

Recall that after one of those infamous outbursts amidst smoking and drinking on live Facebook, Archbishop Duncan-Williams and his family took to social media to react to the situation, describing Daniel’s condition as a ‘mental disorder’.

Read the Full statement below:
Archbishop Nicholas Duncan Williams and his family thank you for your prayers. Daniel’s outbursts on social media and elsewhere should not be media fodder or click-bait. We acknowledge that the obscenities are abhorrent but understand that he has a serious illness.

Daniel has undergone the very best medical interventions, treatments and hospitalizations, yet he experiences relapses when he does not continue on his prescribed medication.

The Archbishop says “this is a test of his faith, but he will overcome”. In his own words; “I acknowledge the situation my son is in, and I still love him…please continue to pray with us…. “Love covers a multitude of sins.” 1 Peter 4:8

The Archbishop and his family continue to stand firm in their faith believing God for Daniel’s full deliverance, healing and restoration.

We ask that you please respect their privacy as they navigate through this time.
Psalms 3:3.

This guy too is doing things oo. First his video went viral with ladies in a pool, then on the bed

. When the devil decides to use the pastors son any how

His father is highly respected and one of the finest pastors in the world and his son keeping on shaming his dad makes me sad. The guy needs counseling and prayers as well cos it’s strange how all of a sudden he broke the internet with this kind of acts.

I tell you no lie . He needs serious prayers and counseling. Cos the things the devil is using him to do dierrr 3y3 hu

According to him he wasn’t allowed to do the things he wanted to do for so long and now he has the freedom to do so. I was asking myself is this what he was prevented from doing all this while and wasn’t it the best? I pray he stops all those things and return back to God

In pastoral artists when ur praying seriously for people outside and ur not careful to pay attention at ur home.

You’re absolutely right. I have a friend whose dad is also a pastor but if you see what this friend of mine does you will be shocked. So as a pastor you’re entitled to face this kind of challenges but you need to try all your best to prevent it before it even comes into reality

You see how it all started, Pastors like this faces this kind of problems and so whiles praying for others as you said, they need to pray times two for themselves and their home too. I pray God strengthens him in tough times like this and help his son to return back to Him(God).

The Archbishop and his family continue to stand firm in their faith believing God for Daniel’s full deliverance, healing and restoration.

The problem of these renowned pastors is , they force their wills on their children. They at all cost want their children to do pastorial work even if that’s against their natural calling or talent. So these children become depressed and resort to deviant behaviors. That’s exactly what is playing out in Daniel’s case; and oh , I see absolutely nothing wrong with him expressing love for Gyakie.

Yeah most pastor’s kids are spoilt but you mean to see a pastor’s kid smoking and drinking isn’t a bad habit? Wow it’s your thought though and no human is perfect, it being a pastor or his kid but somethings shouldn’t be done once your Bible teaches you not to do.

Deliverance I’m not so sure his dad hasn’t tried it so many times. He needs counseling that’s sitting him down to find exactly why he feels like doing stuffs like this, is the best thing for him and then finding solutions to whatever he says.

He’s bold and as for love everybody deserves it. It being a pastor’s kid, so I don’t have a problem with Deewills showing interest in Gyakie

Bro you’re right. You being a pastor does not mean your children whether being called by God or not to also do his work. Everybody came to this world with a whole lot of different talent, so if you recognize yours as being a pastor, does not mean your kids must also do same.
With Deewills expressing his love for Gyakie isn’t anything bad. Everybody deserves to love whoever they want to love.

Yeah I understands you but such person, whiles counseling him or her, you need to find out from him what he need and the reason for his deviant behavior which he thought is right. The counselor getting the idea about all this can help in changing him or her.

Everybody came to this world with a whole lot of different talent, so if you recognize yours as being a pastor, does not mean your kids must also do same.

Exactly, why must you want your children to at all cost be called to do what you are doing as pastor. We all have different destiny. Check out most of the renowned pastors and their children; all ofor them are also pastors in the church. Not saying is bad but I think most of them are coerced into it

Check out most of the renowned pastors and their children; all ofor them are also pastors in the church. Not saying is bad but I think most of them are coerced into it

Isn’t it wonderful. How can it be that every member of that family do have the same destiny to be a pastor. This is the cause of the fast rising fake pastors here and there and now it’s even difficult to recognize the real ones among them.