That’s what’s happening now with space. Billionaires are suddenly launching themselves into it. And regular folks are looking up and saying, “Hmm, what do they know that we don’t know?”

Nothing. It’s the same old air. Just because billionaire Richard Branson hurled himself toward heaven last week doesn’t mean he gained admittance. And just because billionaire Jeff Bezos this week plans to go a few miles higher than Branson did, doesn’t mean he’s somehow boldly breaking through — as Captain Kirk used to call it — the final frontier.

Both of these men are flying about half the altitude that Alan Shepard did more than 60 years ago, when he became the first American in space. Now that was groundbreaking. The Russians had put a man in orbit a few weeks earlier, we were in a race for global pride (and perhaps dominance) and no one at NASA really knew what would happen, having only sent a chimpanzee up on a previous flight. 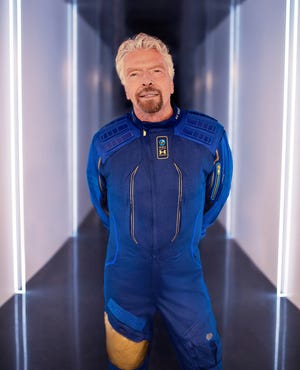 Shepard pulled on a helmet, climbed atop a Mercury rocket, actually steered the thing some of the time, and landed 15 minutes later in the Atlantic Ocean. He was cheered from coast to coast.

Three weeks later, President John F. Kennedy committed to a space program with the aim of reaching the moon before the end of the decade.

Which, by the way, we did. I remember keeping a scrapbook of that Apollo 11 flight in 1969, cutting newspaper articles out every day as the three astronauts approached the lunar surface. Back then, if you had asked me or any starry-eyed kid, would we want to go along for that ride, we’d have peed our pants.

Liftoff! (If I can squeeze it in)

Shepard’s flight, in May 1961, was about the nation’s ingenuity. Bezos and Branson are about money. And ego. And doing cool stuff that no one else gets to do.

But, honestly, what are they really doing? Taking a private craft 50 or 60 miles into the sky, and coming back in less time than it takes to get a short stack at the House of Pancakes? What’s the big deal? They don’t even serve a meal. 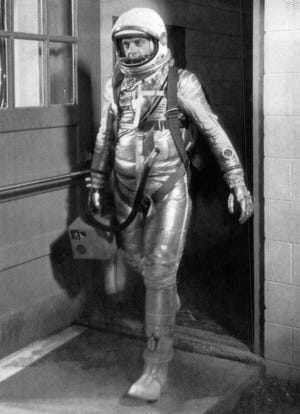 Yeah, you get to take a selfie with the Earth on the background. A nifty souvenir. Maybe float for a minute in weightlessness. But is that worth $28 million? That’s what an unidentified person paid for a seat next to Bezos and his brother and the American aviator Wally Funk on the inaugural flight of the New Shepard spacecraft, part of Bezos’ Blue Origin rocket company. (Who comes up with these names? New Shepard? Blue Origin? It sounds like a line of essential oils.)

Twenty-eight million dollars is unimaginable to all but a select few people on Earth. But here’s how unimaginable it really gets. The person who paid that $28 million suddenly realized last week that he or she had, and we’re not making this up, “a scheduling conflict.”

A scheduling conflict? How exactly does that go down? “Sure, Phil, I’ll go heli-skiing with you Tuesday in the Himalayas. Oh wait. Shoot! I have that space flight thing! Darn it. Lemme see if I can cancel. …”

Fuel your hometown passion and plug into the stories that define it.

The clearly overbooked individual will reportedly postpone to a later flight, allowing an 18-year-old Dutch enthusiast to take a seat. This story got a lot of hype last week. Wow. An 18-year-old kid gets to go to space? How cool!

Well. Kinda. He’s the 18 year-old son of a very rich Dutch CEO whose hedge fund is worth over $8 billion. Not exactly the kid next door. We know the young man’s name is Oliver Daemon. We don’t know if this is some kind of over-the-top birthday present from Dad, or if he got to choose between this and, say, buying the Los Angeles Rams.

Can space contain their conceit?

Bezos, who has softly needled Branson’s trip as being a bit too low in altitude to really be called space, has scheduled his flight for this Tuesday, July 20, the anniversary of the Apollo 11 launch. That is hubris of the least subtle kind. 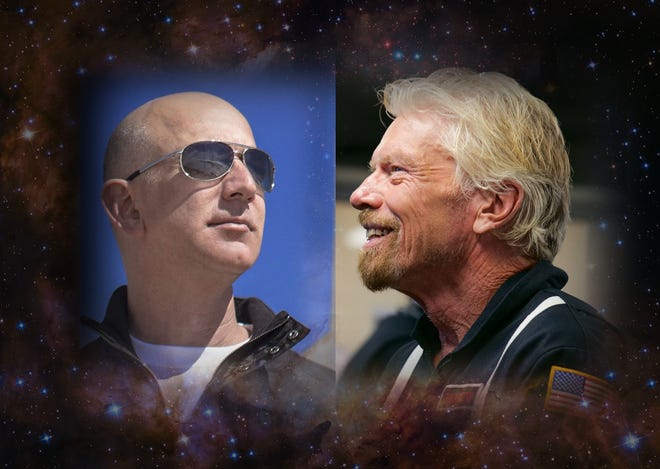 But, ultimately, that’s what this is about. When you can buy or sell anything, as Branson and Bezos and Elon Musk can do (Musk is planning an even more exorbitant private space endeavor, with initial seats going for $55 million), what’s left to do but try and insert yourself into history?

You will hear all three men talk about how these flights are actually about opening space to the general public. Maybe. But how come the first seats went to them? When my grandmother made a cake for the grandkids, she didn’t take the first slice.

The bigger point is, if you’re just going around in a circle, how is that worth $28 million or $250,000 or even $40,000, the various prices at different stages that the billionaires are saying it will cost to make the journey.

Personally, I’ll pay $200 for a balloon ride. But anything more than that, I better be seeing some different weather when I land.

The fact is, we’ve been walking around for decades never once concerning ourselves with talking a lap around the Earth. And now, suddenly, like that old building with a new line around it, this is something we have to explore? There are already hundreds of celebrities and rich folks signed up for seats on future Branson flights, reportedly at the price of around $250,000.

Here’s a better idea. Book a cheap airline flight at night, look out the window when you get above the clouds, remind yourself how magnificent the universe is and how small we are in it. Then, take the remaining $249,700 and give it to people in need. It’ll make a much bigger difference than a selfie. And last a lot longer than 15 minutes.

The good thing about technology is that, it keeps improving each and everyday. It keeps getting better and bigger. I won’t speak much about the strides being made by other nations to get their “technological flags” up high in 21st century.

I will want just narrow it to out african cotext to examine what were doing right or wrong. Is Africa doing same to fly in space , invent new war machines, buI’ll phones amongst others? Your guess is as wild as mine. Oops I forget , Kantanka do all.

A little while longer then we are entering anew era… a digital world, we need to increase our pace in technological perfection because we might be stuck in the past as the world moves forward. Promoting more of IT studies will help tho.