The Celebrity Photography who refuses to Photoshop Movie Icons 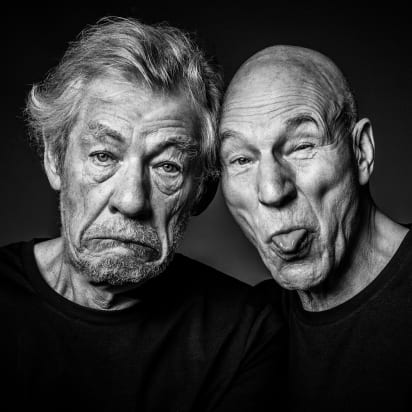 Celebrity photographer Andy Gotts has snapped numerous stars, from Hollywood titans Al Pacino, Brad Pitt and Julia Roberts to promising newcomers like Anya Taylor-Joy and Nathalie Emmanuel. But one picture stands out to him as the most poignant of his career: a portrait of the late Tony Curtis, his face painted with an American flag.

The British photographer recalled years of begging the actor’s agent to set up a shoot. After multiple rejections, he found a phone number for Curtis’ wife, and she picked up. A shoot was arranged for the next day.

That night, however, Curtis called Gotts. The aging star, who suffered from various health issues and was using a wheelchair at the time, said he was feeling unwell.

“(He said), ‘I don’t feel good at all. But I will honor our commitment tomorrow, if you make me one promise,’” Gotts recounted in a video interview. "I said, ‘Anything, anything.’

“He said, ‘Will you make me look like an icon one more time?’ And I said I would do my utmost.”
It was the last portrait ever captured of Curtis, according to Gotts, who said the actor saw the photograph just hours before his death and had declared it “the best ever taken of me.” Characteristic of Gotts’ muted, shadowy style, the image sees catchlights glimmering in the actor’s eyes as he stares out with a painted face.

The image is among dozens of celebrity portraits featured in Gotts’ new exhibition “Icons,” which is now open in London, and an accompanying book of the same name. In a career spanning three decades, the photographer has become a favorite among celebrities for his distinctive style and low-key photo shoots.