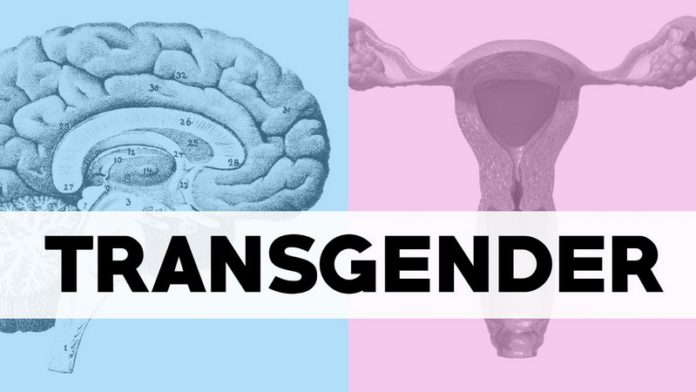 A mum has revealed how her three-year-old trans daughter tried to cut off her pənis in a desperate attempt to be her “true self”.

Mum-of-two Jess Bratton said the shocking incident five years ago made her realise how her doll-loving son Logan wasn’t going through an experimental phase, but instead identified as a female.

Logan had always had an interest in girls’ clothes and make up, and had always been keen to see how her mum and younger sister dressed.

Jess had assumed it was merely a stage that every child went through.

But when she saw Logan trying to cut off her pənis with some scissors she decided to look into the possibility that her child was trans. 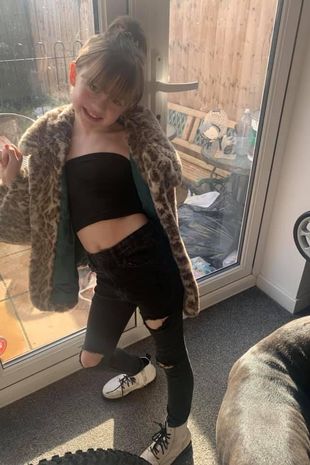 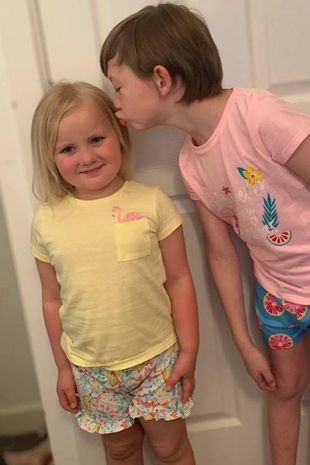 Jess, 25, recalled: “I was in the kitchen making dinner, with my back to Logan’s bedroom door. She was chattering away to her dolls but suddenly went silent.

“I shouted her name and got no response, so seconds later I went into her room and caught her sitting on the bed with her trousers down, holding a pair of scissors to her bits.

“I gasped loudly, which made her jump, and quickly took the scissors off her.

“Then I just held her in my arms and we both cried.

“Afterwards I explained that cutting herself would really hurt and that because she wanted to do something so drastic, we would have to talk to a doctor.

“That day made me realise the severity of the situation. It wasn’t just a phase; my little boy really did want to be a girl.”

Jess couldn’t bear to see Logan unhappy, and she knew things would have to change. 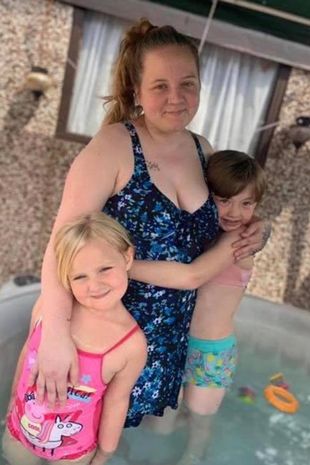 She approached her family GP in Stoke-on-Trent, Staffordshire, to explain the scissors episode and that Logan no longer wanted to wear boys’ clothes.

The doctor suggested that Logan’s yearning to be a girl could still be a phase, but said she was too young for counselling.

Jess said: “My GP said there wasn’t really anything we could do but requested I keep a close eye on Logan in the meantime.

“Before this, I had tried to encourage Logan to dress in boys’ clothing and play with boys’ toys, but after the scare I decided to welcome her wish to change.”

Not long before the incident, Jess had given birth to her youngest child Lylah, now six, with Logan doting on her little sister from the start.

Logan soon began wearing more cropped tops and dresses, rather than the boys’ clothes she had been dressed in before.

Jess, a healthcare assistant for residents with mental health and dementia, said: “When Logan was just one, she was wearing tea towels on her head, wishing for long hair.

“As soon as she was old enough, she started asking to do my hair and make-up. She was just so interested in me – as well as her sister when she was born.

“As Lylah got older, the pair of them became more like sisters than brother and sister, and Logan’s desire to be a girl never went away. In fact, it only got stronger. 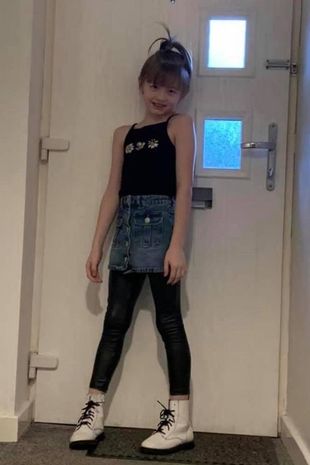 “When Logan was six, she started talking about having a səx change.

“She told me she didn’t want her bits and kept saying she wanted a ‘Mary’ like me and her sister! I told her that when she was a little older, the doctors would be able to help her.”

Jess, who is separated from Logan’s father, is relieved that the reaction from family and friends has been positive.

She said: “Logan has a strong support network and luckily, has only had good things said to her.

“At the beginning there was the odd person telling me to ‘nip it in the bud’ and to stop her wearing girls’ clothes, but I wasn’t too worried.

“I knew it was normal for kids to try new things or experiment.

“There were times when I really tried to get her to be a boy, encouraging her to play football with other boys at the park, but she refused.

“She wouldn’t even entertain it and still won’t – and I don’t want to force her.”

On the 8th March, during the country’s third lockdown, Jess made the brave decision to allow Logan to return to school wearing a girls’ uniform.

Recollecting the day, Jess said: “While she couldn’t stop smiling, I was a nervous wreck! I was so worried about her getting bullied.

“I spoke to a few parents from the school and Logan’s teacher about it beforehand, and they were all so positive

Well, I won’t say anything abut this now. I’m going to eat something. How did 3 year old know his or her sexuality is another. The reason she looks feminine is because they dressed her so. I wish him or her all the best though

Oh, I’m sorry for this tiny child. The condition of this little child can be traced to our flawed bodies on several occasions.

She belongs to the LGBT minority group and she was created by the god you worship. So look at this innocent girl and tell me why the senseless law makers in Ghana want to enact laws against the LGBT community. Batshit crazy and senseless politicians. She could’ve have been a Ghanaian (and of course there are transgender Ghanaians)… then what, she’d be a criminal because she was born this way? Ghanaians need serious education.

I thought the child is a boy, why do they keep referring him as “her”?

Anyway why won’t this boy be interested in becoming a girl when such a thing has has been normalize. Right now almost all the Hollywood movies being produced have that one gay character role in them and these kids are exposed to the internet and media where they see all this staff going on so it’s not surprising at all the he want to become a girl

I thought the child is a boy, why do they keep referring him as “her”?

She’s a girl, she was just born with a penis. She’s transgender. Her identity is that of a woman. This has nothing to do with internet or gay actors.

Massa massa @kod you are just ranting based on emotional antics. So your premise for the argument for gays still stands that the people are born that way and they identify with it? Our leaders of course lack common sense in some of the policies the make but not Policy to criminalize homosexuality.

Again, you said we need education erh, you also need therapeutic massage within you to be able to understand that, every sovereign state have their independent laws that suits it’s people. Some African leaders don’t want LGBTQI just as some western countries don’t want Polygamy.

Our leaders of course lack common sense in some of the policies the make but not Policy to criminalize homosexuality.

Your leaders are not criminalizing just homosexuality. The laws they are passing is against the whole of LGBT. Which means this girl born with a penis would be a criminal in Ghana because she’s the T in LGBT. Is that normal to you?

It has everything to do with them my dear don’t be ignorant
I have been teaching students his age (3) for a long time and they are never aware of their sexes though curious. That is why they are always cool playing with each other. The only time a child will react that way is when he or she has heard or seen something that caught their attention .
There was an incident where two kids tried kissing in my class through investigating I realize they didn’t even know what they were doing but because they always sit with their moms and watch these ‘Telenovelas’ they got curious and where just trying it out. This boy’s problem could be from home so stop blaming your leaders

And is it normal for a 3 year old child to want to change gender? No it’s absolutely abnormal. He is just a kid and can’t make that decision
And also will it be normal if you get rapped by a boy? Nope

That Ghana is a circular state doesn’t mean we should pass laws other countries are passing. They may have the resources and designed mechanisms to control and deal with any eventuality that my escalate but do we? The child will not be treated as other adults of same crime please. Have you heard about juvenile correction center?

He is just a kid and can’t make that decision

So let me ask you. Do you feel (identify) as a man or a woman? When you were 3 did you feel like a boy or a girl? It’s not a decision, you don’t decide, you identify as a boy/girl (man/woman). Imagine you were born with a penis but you identify as you do now (woman, i presume from your name). Would that make you a criminal?

Like seriously bro @kod
Do you even remember anything about that age(3)? Come on, let me ask this too will your mom have agreed to a gender change for you at that age? And I don’t feel like a man or do you feel like a woman?

@Magda2000 I seriously wanted not to comment about this but you’ve asked the question I wanted to ask @kod for me.

will your mom have agreed to a gender change for you at that age?

The dictionary di3, forget ooo. You can’t use this same definition is some dictionaries or Arabic dictionary.

Okay do you identify as an African or European?

Do see yourself tall or short, intelligent or stupid, able or disable? Your answer should lead you to do better analysis.

What you are naturally doesn’t need to be defined by anybody. We have eyes

He was born a male dear, no need to argue about that he wanting to cut his penis off at 3 is normal because he can’t reason but you saying ‘he’ is a girl is wrong because I never heard of someone with penis being referred to as a girl you can search for that
He was 3 and had no brother and an absentee dad he only wakes up to females and makeup so it is absolutely normal for him to take interest in it
So are you trying to tell me @kod that if you have a boy aged 3 and wears makeup of her mom when she is not around you will change his gender?

You can’t use this same definition is some dictionaries or Arabic dictionary.

Are you Arabic? English is your official language so we use the English dictionary.

What you are naturally doesn’t need to be defined by anybody.

The same way YOU shouldn’t tell this little girl she’s a boy because she was born with a penis.

So are you trying to tell me @kod that if you have a boy aged 3 and wears makeup of her mom when she is not around you will change his gender?

I can’t change anyone’s gender not even when I have kids. Kids (humans) go through a phase of discovery, if through discovery she/he feels better as a boy/girl, who am I to say she can’t be herself?