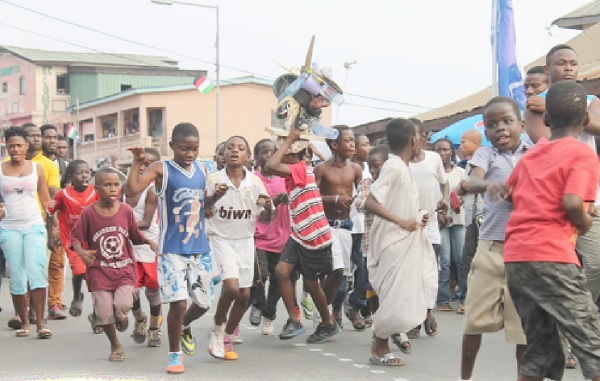 Children are not left out of the event

In past years, the carnival style event which is part of activities held to climax the festivities attracted people from near and far.

On the day, usually a Saturday, the main road leading to Teshie in Accra is blocked and traffic is directed to alternative routes such as the LEKMA Road (Bush Road) through Manna Hospital to the Greda Estate or Teshie First Junction.

From one end of the road to the other, different groups made up of young people and dressed fancily sing and dance to well-rehearsed tunes.

They also sing their renditions of some popular songs.

If you pay attention to the songs and chants by the different groups, you are likely to hear names of popular people, politicians, opinion leaders and some traditional rulers in Teshie.

Some groups also sing about national events and leaders.

In the past week, some youth have been spotted at Teshie preparing for this year’s event which comes off today, September 4.

Ahead of the event, The Mirror sat with Nii Ashikwei Kwaobotswe II, the Teshie Dzaasetse, to find out why they sing about leaders and what the essence of the event is.

The different groups start composing songs while waiting for the “Kpashimo” day and on the day, they publicly shame people who live contrary to societal norms and praise those who live exemplary lives.

“In the olden days, if you do something wrong, they will compose your songs, sing it through the town to your house, carry you shoulder high and parade you through the town singing the song. Some who couldn’t stand the shame got depressed and shied away from people or even died before the next “Kpashimo.”

He said out of fear of being ridiculed during the festivities, people were cautious of their dealings and tried to live decent lives.

“Tsesebumo”
If you have ever been to the event, you will realise that usually there is a person who carries a bowl full of water and herbs.

The carrier is guarded as it is believed that they can be possessed by the contents of what they are carrying.

Nii Kwaobotswe said usually the kpashimo was done for a week and throughout that period the “Tsese”, the wooden bowl and its content, was carried throughout the town till the seventh day when the contents of the bowl were poured. 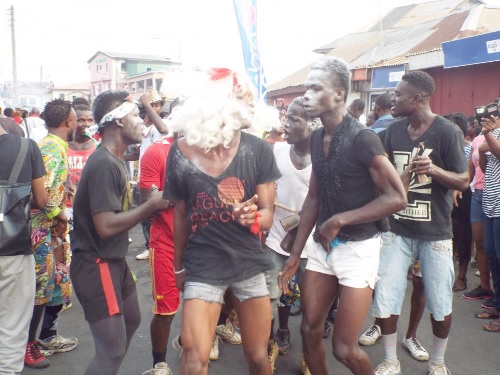 He explained that ““Tsese” is believed to contain some powers and so people with spiritual challenges are encouraged to speak their needs into the bowl or rinse themselves with water from the bowl hoping that they will be answered favourably before the next Homowo”.

“If you come to the festival, you may notice that some women carrying little children drop money or other valuables into the bowl as the carrier passes. In some cases, these women have been childless for years and had “dared” the gods to bless them with children in the previous years after the water from the bowl had been poured on them. Usually, what they drop in the bowl the following year is a token of appreciation to the gods for answering to their prayers.”

Over the years, there have been assertions that people who carry the “Tsese” don’t live to see the next year but the Dzaasetse noted that it was only speculations.

However, once you are chosen to carry the bowl, you are expected to live a life of piety and cleanliness and usually it is those who live immoral lives who die.

Asked how the carriers are selected, he answered that a particular family had the role of selecting the carrier.

The person must be physically fit and of sound mind.

Other activities
In addition to the “Kpashimo”, also happening today is a cycling competition and Akro Strongest Man, a search for the strongest man in Teshie.

Other activities scheduled for the weeks ahead include Miss Teshie Homowo, a thanksgiving service, Teshie Annual Homowo School and the Akro Excellence Awards, an event to honour outstanding personalities at Teshie.