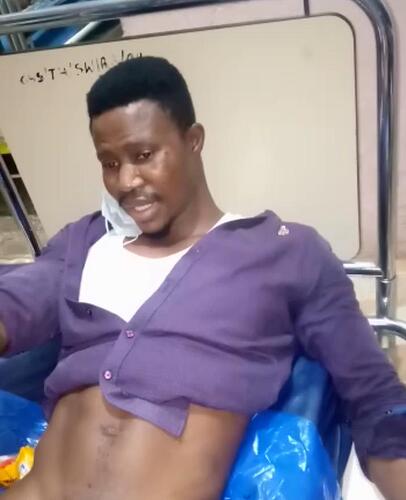 A man in custody shocked officers at the Tafo Pankrono Divisional Police Command in the Ashanti Region, when he chewed off the testicles of another inmate during a fight in a holding cell.

It still remains unclear what sparked the Thursday morning brawl at the station’s charge office.

A police incident report said the inmates, Jafaru Boakye, a remand prisoner, and one Awudu Abdulai, were engaged in a scuffle.

In the ensuing melee, Abdulai reportedly bit the testicles of Boakye, leaving him with life-threatening injuries.

He was rushed to the Tafo Government Hospital where he was instantly operated on, the police report said.

So he was watching is opponent’s mouth go near his balls?

very sad and at the same time funny

I’m thinking… what kind of fight will get your balls in the opponent’s mouth? How were they fighting? I want to see the fight.

Eii. How did this happen? I mean how did they get naked in the first place? I never knew there were carnivores in prison too oo. Chewing off someone’s testicle sound scary papa

The testicles de3 it’s nam pa aa dompe nim so when he get it he will surely bite it for you. But seriously information w) wiase oo​:joy:

Arh is this true? Because how can you be there and watch someone bring his head close to your balls . Maybe bra Awudu taught it was a meat since they don’t get some to chew over there