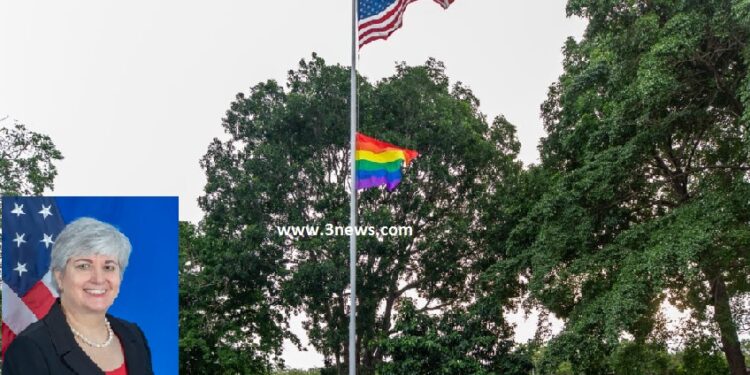 Member of Parliament (MP) for Ningo Prampram Constituency Samuel George Nartey says it is an affront to the sovereignty of Ghana for the US Embassy to be promoting the rights of homosexuals in this country.

According to Sam George, as the MP is popularly known, the US cannot do same in a country like Saudi Arabia, where the practice is abhorred.

It comes on the back of the hoisting of LGBTQI+ flag at the US Embassy in Accra, apparently in solidarity with the LGBTQI fraternity in Ghana.

“We aim to increase the visibility of, and address the challenges faced by, the community as we stand against injustice toward not only women and girls and religious minorities but also toward members of the LGBTQI+ community,” she remarked.

She indicated that though the even was low-key, the US is solidly behind the community in Ghana.

“Just as senior officials raised the Progress Flag for the first time at the State Department last Friday, I’m happy to invite you all to watch as we hoist the Pride flag in honor of the people we celebrate this month and as a symbol of our continued commitment to the human rights, dignity, and inclusion of all LGBTQI+ people.”

But speaking on this on Metro TV on Tuesday night, the Ningo Prampram lawmaker, who is leading the sponsorship of Private Member’s Bill to criminalise the practice, charged the US Embassy to be minded by the Vienna Convention.

“The Vienna Convention on Diplomacy states that diplomats must be respectful of the local laws of their host country. If the host country criminalises, as it is today, homosexuality in our country, it is an affront to the sovereignty of this state hoisting an LGBTQ flag in our country.”

“Because of the discussion on the passage of this bill, they are trying to make a grand-stand position. It is needless showmanship because the US Embassy in Saudi Arabia has not hoisted a flag.

“And I will demand or expect the [Jubilee] House to instruct the Foreign Minister to summon the US Ambassador.”

“Because of the discussion on the passage of this bill, they are trying to make a grand-stand position. It is needless showmanship because the US Embassy in Saudi Arabia has not hoisted a flag.

What does she take us for? She is lucky Ghana is not like some other African countries where violence is the only language they understands. The US embassy would have been set on fire by now.

When you go to Rome, you do what Romans do but the US ambassador doesn’t want to hear that. She knows we are accepting this LGBTQ but she’s hoisting their flag instead. Can a Ghanaian go to US and start preaching polygamy? Hmmm