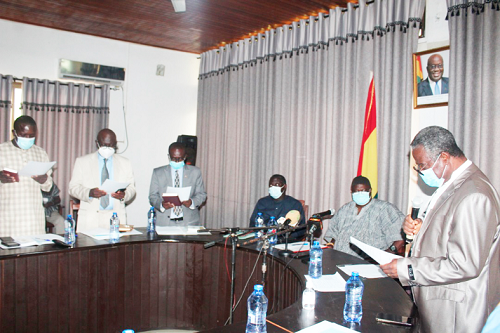 Lands which have been vested in the state will be given back to their rightful owners under the administration of the new Land Act, 2020 (Act 1036), a deputy Minister for Lands and Natural Resources, Mr Benito Owusu-Bio, has said.

He said the law had mandated the Lands Commission to put in measures within six months of the passage of the law to come out with modalities by which the vested lands would be returned to their rightful owners.

He explained, however, that lands acquired by the state for developmental purposes were different vested lands, which were being held in trust by the state on behalf of their owners and were, therefore, not part of lands which would be returned to their rightful owners as stipulated in Act 1036.

Mr Owusu-Bio, who was inaugurating the Bono Regional Lands Commission in Sunyani last Tuesday, said already, a national committee had been formed to come out with modalities for the return of the vested lands to their rightful owners.

The 19-member Bono Regional Lands Commission, with membership from professional bodies, district and municipal assemblies and institutions, is under the chairmanship of Mr Isaac Kwadwo Amankwaah.

“I charge you to be abreast of all the relevant sections and functions of the commission to enable you to discharge your duties expeditiously,” he said.

He said there was also the issue of indiscriminate sale of land without regard to approved planning schemes by agents claiming to be acting on the instruction of traditional authorities, and implored the commission to address such issues and ensure a harmonious relationship among stakeholders.

Mr Amankwaah said the commission would honour the confidence reposed in the members.

“We are aware of the onerous task that has been placed on our shoulders,” he said, and pledged that they would work with relevant stakeholders to ensure a smooth land administration in the Bono Region.

In an address read on her behalf, the Bono Regional Minister, Mrs Justina Owusu-Banahene, urged members of the commission to use their expertise to find solutions to the numerous land issues in the region.

The government I really thinking about it’s citizens. It’s time to return all vested lands to the righful owners. The lands commission should be a stakeholder in making this happen smoothly