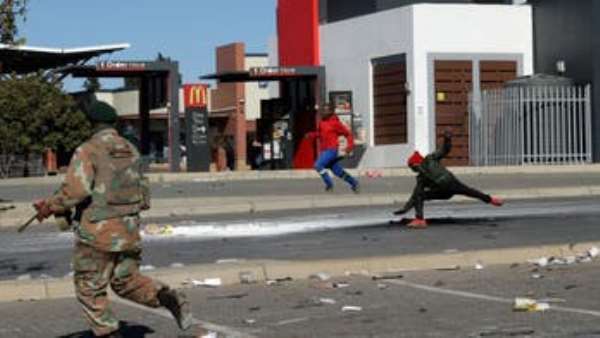 For this reason, public office-bearers ignore their constitutional obligations at their peril. This is so because constitutionalism, accountability and the rule of law constitute the sharp and mighty sword that stands ready to chop the ugly head of impunity off its stiffened neck” - South African Constitutional Court, in the “NKANDLA MATTER” 2016.

By operation of constitutionalism and rule of law, former South African president Jacob Zuma, is serving a 15 month jail term for contempt of court. He has appealed the decision, and is entitled to a fair hearing in accordance with the same rule of law and constitutionalism that got him there.

But there has been a lot of trouble in parts of the country since Zuma’s incarceration in early July 2021. Close to a hundred people have been killed, following looting of shops and burning down of property and infrastructure ostensibly in protest over what Zuma supporters believe to be “unfair and or politically motivated incarceration”. And the arguments for this position have been strong and sometimes compelling albeit in the context of “customs and traditions” that deify leaders and absolve them from any wrong doing.

But South Africa is Africa’s third largest economy in GDP terms; coming after Nigeria and Egypt. For a myriad of reasons, Nigeria and Egypt have fallen short in the areas of constitutionalism, rule of law, good governance, capable institutions and systems necessary to build on their comparatively large economic powers for development. South Africa on the other hand has the industrial base and production infrastructure as well as institutions and systems grounded in constitutional democracy to support its economic development on sustainable basis. `

With this comparative advantage, South Africa is best positioned to champion Africa’s economic renaissance, setting the pace for willing nations to follow. But this good break can happen if and only if the country stays faithful to good accountable governance, rule of law and tenets of constitutional democracy as the Constitutional Court espoused in the “NKANDLA MATTER” 2016.

The internal struggle for the spine and soul of the African National Congress (ANC), the party that has governed South Africa since independence in 1994, must be duly acknowledged and how that struggle is perceived to have contributed to the current troubles must not be ignored. The politics will certainly not make things easier for leadership so long as legitimate and reasonable expectations of the ordinary South African; to be able to put body and soul together, have still not been met, and complicated further by the COVID-19 pandemic.

These complications notwithstanding, the values of good accountable governance, rule of law and constitutionalism must supersede every other need in this season of path finding for a better and prosperous future for all. Should those other considerations hold sway, South Africa would fail and that failure would be fatal for the continent of Africa in its entirety. Challenges of Egypt and Nigeria and many others that started well at independence, fell short and are still recovering must guide the government and people of South Africa. Examples abound. There is no justification to acquiesce under any form of pressure to institutionalize corruption and bad governance, the twin causes of poverty in Africa.

Indeed, it is not difficult to come to the conclusion that; it is poverty, economic inequality, destitution and neglect that moved the vulnerable to burn down and loot shops. It is certainly not because they love Zuma, who submitted himself to prison. The looters are angry and hungry citizens conditioned to believe they had “opportunity” to loot what they had been denied since the apartheid days and burn down property they can never own. Again, for the politics; some rich and powerful people may have orchestrated the chaos, knowing the proclivities of the poor and marginalized to react accordingly. Whatever it may be, cool heads must prevail!

The position of South Africa, by way of industrial base and production capacity to catalyze the realization of the African Continental Free Trade Area (AfCFTA); which comes with the greatest potential to lift a majority of the vulnerable in Africa out of poverty must not be lost on us. To that end, constitutionalism, accountability and operation of the rule of law remain non-negotiable. They are the sacrifices South Africa must make for her own progress and that of the African continent at large.

One thing about the South Africa I like is hardly you hear people rallying and demonstrating about lack of employments and other stuff, I’m not saying it doesn’t happen but they have a very good economical system and all they need is a good and competent leader to steer the wheel.

South Africa is a beautiful country but the citizens are horrible,very horrible. They’ve made the tourism in the country less attractive as many Africans who go to SA for vacation and tourism stopped going .

The hooliganism and hoodloms in that part ilof Africa is bad. They must have the political will and sacrifices to chant this narrative