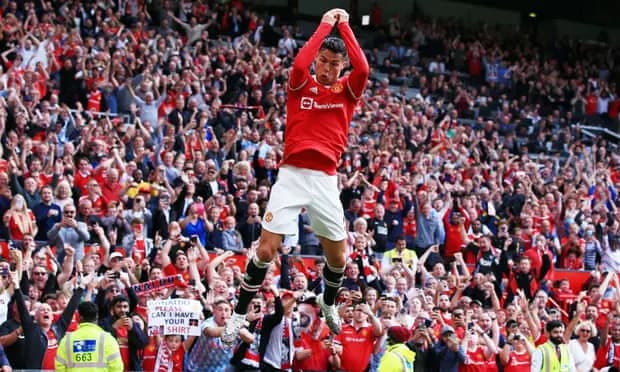 Cristiano Ronaldo scored twice on his Manchester United return as they moved top of the Premier League with victory against Newcastle.

It took Ronaldo 47 minutes to reopen his goalscoring account for United, 12 years after his last appearance for the club.

Ronaldo, 36, who re-signed for United from Juventus in August, tapped in from close range to give the hosts the lead in first-half added time.

He added his second just after the hour mark, driving a left-foot shot under Newcastle goalkeeper Freddie Woodman after Javier Manquillo had equalised for the visitors.

Bruno Fernandes extended the hosts lead with a thumping long-range effort that flew past Woodman into the top-left corner before Jesse Lingard rounded off the scoring with a superb finish into the other corner after an intricate move.

Honestly I’m a Messi fan but Ronaldo is doing wonders with his energy and talent. This statement he just made with his come back to Manchester United means he’s one the best if not the best in the world. I personally admire him and wished he came to Barcelona instead of man U. That team is allergic to winning trophies

Ronaldo is a generational talent. Being 36 years of age and putting in this kind of play always makes him absolutely and undoubtedly the best. Checking his records when he turned 30 years of age made me love him more. His hard work and determination puts him ahead of all footballers.

If he wanted to go to the Spanish league, he would have gone to Real Madrid rather than Barca, because Ronaldo playing in Barca will be really weird

Why will it be wierd for Ronaldo playing Barca, @rkay ? Because Messi was there, there’s nothing wrong with that koraa. But the guy still got form and stamina though. Breaking and setting new records here and there.
What he did with Manchester today was phenomenal.