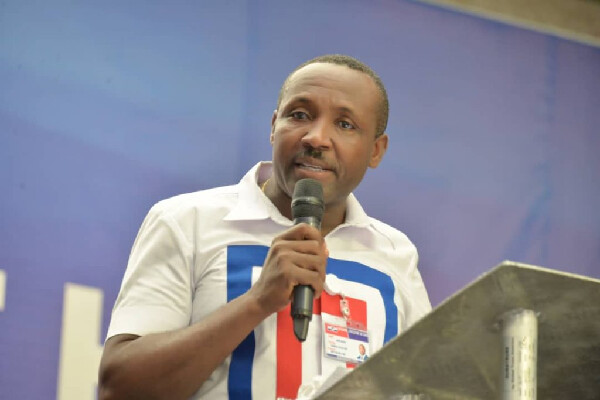 The ruling New Patriotic Party (NPP) has challenged former President John Dramani Mahama to report his claims of corruption against the government to the appropriate agencies if indeed there is any substance in them.

General Secretary of the NPP, Mr. John Boadu, said the fight against corruption was not about mere allegations but was a process that required multi-stakeholder efforts.

Speaking at a press conference in Accra last Thursday, the NPP scribe said the former President was engaging in political fanfare, adding that he (Mahama) had no moral authority to talk about corruption, accusing him as “someone who actively participated and superintended worse scandals.”

As part of his “thank you tour, Mr. Mahama, in a radio interview at Tamale, accused President Nana Addo Dankwa Akufo-Addo of failing to fight corruption as he promised during his quest to become the President.

According to him, he (Mahama) showed more commitment to fight corruption and did far better in the fight against corruption as compared to President Akufo-Addo.

Reacting to the claims, Mr. Boadu said the former President must do away with the old tactics of shouting corruption without evidence.

“Former President Mahama asserts without proof that the NPP has stolen Ghana’s money and that he can assure accountability through elections.

"This is extremely strange, coming from a party credited by the Supreme Court of Ghana with the ability to create, loot, and share public funds with impunity,’ he said.

Mr. Boadu said the NPP had shown serious commitment to uprooting corruption by going beyond the rhetoric.

He said the fight against corruption could only be won through the strengthening of anti-graft agencies.

The NPP, he said, had invested heavily in the fight against corruption through the establishment of the Office of the Special Prosecutor, the passage of the Right to Information Act, the strengthening of institutions such as CHRAJ, the police, the judiciary, as well as the digitization of the economy.

In a related development, the NPP has also rejected some electoral reforms proposed by the opposition National Democratic Congress (NDC).

The NDC had proposed six electoral reforms for the consideration of the Electoral Commission, including a legal backing for the Inter-Party Advisory Committee (IPAC) and the adoption of an equitable voting formula for political parties at IPAC.

Mr. Boadu, however, described the proposals by the NDC as “empty”.

He said the NDC disregarded IPAC, which was the appropriate forum to discuss such issues, but, rather brought it to the media domain.

“The NPP is a serious political party and we do not play to the gallery. If the NDC is serious they should table it at the right forum which is IPAC. But if on the other hand, they think that the media can take the reforms they are calling for, then they should go ahead with their rantings in the media space. They should be honorable enough and come back to the civilized discussions and debates,” he said.