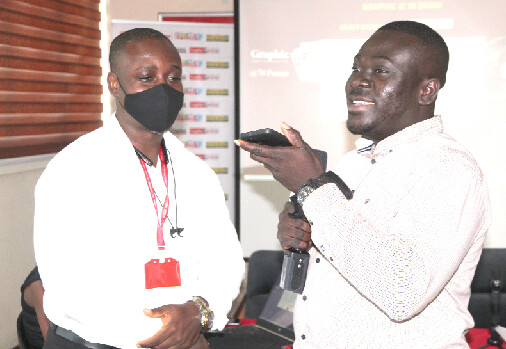 Other winners who were selected at random from the entries for the daily and monthly draws received cash prizes as rewards.

Five daily winners were each rewarded for accumulating a minimum of 1,500 points daily for the months of May, June, and July this year, and received GH¢200 each.

The draw was conducted by a Sales and Circulation Officer at the Graphic Communications Group Limited (GCGL), Mr. Benjamin Tsatsu Korsinah, and a team from Afrifanom, formerly known as Vokacom, the technology partners for the promotion.

Speaking to Daily Graphic on phone after the draw, Mr. Nartey expressed his excitement, saying “I am very grateful to Graphic for this opportunity because as a pupil-teacher, it would have taken me many more years to save money to purchase a car like this.

“At a point in time, I lost hope because I was not winning, but what kept me going was that I had already engaged in the promo. So I will advise that whatever you start in life, never give up because it would definitely yield results someday,” he said.

Mr. Korsinah explained that the draw was transparent as the selection process was streamed live.

He urged participants to keep partaking in the draw to help increase their accumulated points and enable them to enter the grand draw.
“It is an exciting opportunity for all our loyal readers to win something,” he said.

The promotion, which is available to customers on the MTN and Vodafone networks, vendors, and Graphic App users, forms part of the 70th-anniversary celebration of the GCGL which was commemorated last year.

Readers of any of the GCGL’s brands — the Daily Graphic, The Mirror, Graphic Sports, Graphic Showbiz, Graphic Business, Junior Graphic, and Graphic Online — are rewarded daily, weekly, and quarterly with prizes worth over GH¢1 million.

Participants in the promo accumulate points by increasing their number of views on Lalafio.com.

Customers may also participate in the promo by filling out cut-outs from the Daily Graphic and dropping them off at selected collection points across the country.

To qualify, participants have to accumulate more points by views of live music performances on Lalafio.com.

The more views accumulated, the more points are accumulated towards winning a car.

Besides, participants may accumulate more points by downloading the Graphic NewsPlus app directly from Lalafio.com where users can share screenshots of their profile pages to earn extra points.

Screenshots shared must be from active accounts on the Graphic NewsPlus app in order to earn extra points.

The promo is being sponsored by RANA Motors.