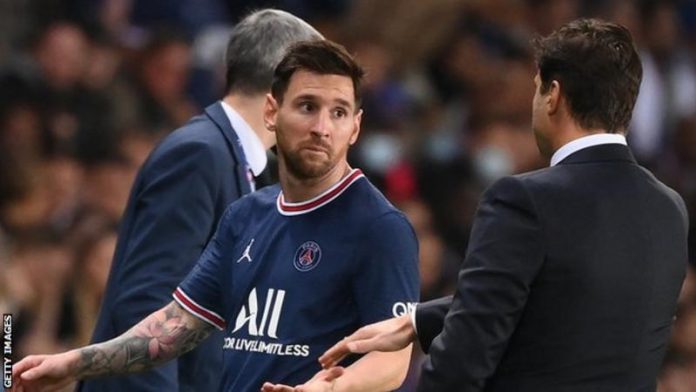 Paris St-Germain boss Mauricio Pochettino has revealed an injury was the reason he substituted Lionel Messi during Sunday’s win over Lyon.

Messi appeared unhappy at being replaced, but Pochettino said he had taken a knock to his left knee.

The 34-year-old will miss PSG’s trip to Metz on Wednesday and is a doubt for next week’s Champions League game against Manchester City.

Pochettino said he noticed “Leo was looking at his knee”.

“We are pleased with the way he played,” said the former Tottenham manager, who did not mention Messi’s injury following the game on Sunday.

“He played very well in the first half, and the only thing missing was a goal. He played for 76 minutes and, with all the information we had, we decided to take him off.

“Of course I understand the situation and I accept it as it is.”

The 2-1 win over Lyon was Messi’s third appearance for PSG since joining as a free agent after leaving Barcelona – and his first at the Parc des Princes. 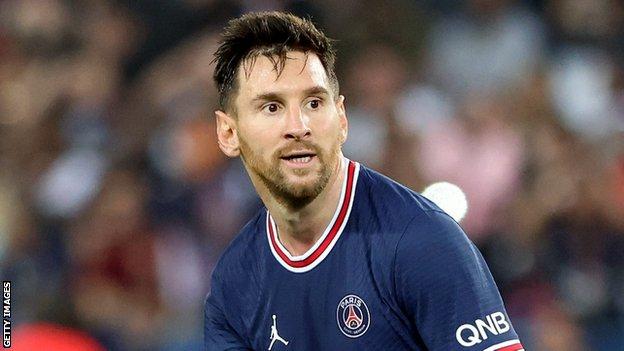 Messi is still waiting for his first PSG goal

Fitness reasons and the international break prevented the six-time Ballon d’Or winner from making his home debut earlier, with Pochettino accepting his substitution would have surprised observers as PSG chased the winning goal.

“It is not a surprise for me, but the priority is always the well-being of the player and in this case we thought it was the best thing for him to take him off,” he added.

“All great champions always want to be on the pitch and that is understandable.”

The Argentine star underwent an MRI on Tuesday, which showed signs of bone bruising, with PSG saying a follow-up examination will be carried out on Thursday.

PSG, who are top of Ligue 1 with a maximum 18 points from six games, host Montpellier on Saturday night before welcoming Manchester City to the Parc des Princes on Tuesday.