Prophet in court for allegedly sucking dicks of 3 teenagers 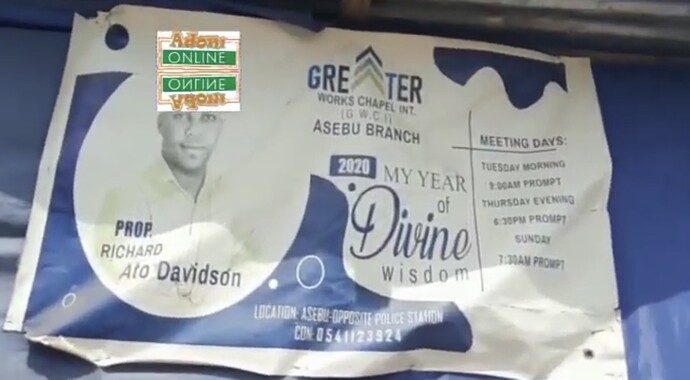 One prophet Richard Ato Davidson has been arraigned before the Cape Coast Magistrate Court 2 for allegedly sucking the pənis of three teenagers and using their sperms for ritual purposes.

The suspect is said to be the Founder and Leader of Wise Chapel International at Asebu in the Abura Asebu Kwamakese District of the Central Region.

He was arrested by the Yamoansah Police.

Information gathered by Adom News Kofi Adjei suggests the suspect lured his victims aged between 16 and 21 to hotel rooms in the name of deliverance over claims that they are being tormented by evil spirits in their family.

Assembly Member for Asebu Amantendo Electoral Area, Richard Mbea, narrating the incident, disclosed his SHS nephew happens to be one of the victims.

According to Mr Mbea, prophet Davidson, upon arrival at the hotel, strip the suspects naked and amid chants lit candles of different colours.

He continues with oral səx and sucks the pənis of the victims and uses a white cloth to absorb the sperms.

The suspect then threatens to kill his victims if they uttered a word to anyone but his nephew could not keep mute any longer after he started urinating blθθd.

Making his appearance, the court presided over by her worship Bernice Mensimah Ackon charged prophet Davidson with indecent assault contrary to section 103(2) of the Criminal Offences Act, 1960 (Act 29)

He has however been granted court bail with two sureties and is expected to reappear on 19th October 2021.

Mr Mbea, after the court proceeding, disclosed several teenagers have lodged similar complaints against the suspect with the police, hence, they will compile the list and make it available during the next hearing.

What are they waiting for to jail him. Why are this things happening. Now every corner in Ghana has a church and most of this prophets are just fake. This one who knows if he will go and consult some oracle so that everything will go on his favor.

The first question I will ask is, are there no institution that regulates or give license to churches to operate here in Ghana. If there is, then there is a big question mark. Now in Ghana every corner you’ll go through you’ll definitely find three to four churches there and we know over the years how this fake pastors here and there are defrauding people all in the name of miracles.

Can you just imagine what this so called pastor just did, sucking the dicks of his church members, like is it some sort of madness which we’re not ready to talk about, or it’s now normal for this fake pastors to do what they’ve being doing recently without being questioned and brought to justice?

I think there is an institution Buh it’s not effective. If they open a branch today by a year time then they start driving cars and the poor people will be giving their all and hard earn money to this fake prophets . I pray God will have mercy on us

What is actually going on in this our country, Ooo naaa, God should desend n come to the aid of his peoples from this wicked Demons who call themselves prophet n so call.

Herh this world ern this is why I don’t go to church because I don’t want make anybody to deceive me say my mom, dad, or whoever is blocking my shine

story dierr hmmm. Most pastors do say that you tho

If there is really an institution that regulates these churches then I don’t see any serious work they’ve being doing all this while.
Talking of these pastors driving in luxurious cars and building of mansions with the hard earned money from church members is overwhelming. A church member will go to the market to sit under the sun all day to sell and then bring the money she earned to this kind of pastors to enjoy.
It’s about time many start thinking as we’ve being deceived for so long. Even Jesus Christ in the Bible was a carpenter alongside the teachings but welcome to Ghana where this pastors takes the pastoral role as a full time job and be frauding people of their hard earned money.

Sometimes it’s not about God descending to free his people is the issue. God creating mankind, gave each and everyone a brain to think for him/herself and here lies the case many are in the churches witnessing some of the works of these fake pastors but still refusing to think for themselves to run away from such pastors or prophet.
You not thinking and being smart enough to run expect God to descend from His kingdom to come and think for you and free you, is never possible. If many start to think, these fake pastors and prophets here and there will sleep hungry if they won’t go out there to work.

Herh this world ern this is why I don’t go to church because I don’t want make anybody to deceive me say my mom, dad, or whoever is blocking my shine

Many are treating their own family as enemies because of the lies told by these fake prophets. Your own mother who carried you in her stomach for nine months, took care of you till you were grown up enough to care of yourself.
There comes a fake and hungry prophet from no where tells you it’s your mother the cause of your hardships and because of that you neglect her. Some people needs to start using the brains in their head and think for these fake and hungry prophets have nothing good to offer but destruction.

story dierr hmmm. Most pastors do say that you tho

Yeah and it’s up to you to believe or not. Some prophets through their actions can make you detect how fake they are but many members of their church turns deaf ears and blind eyes and pretend they’ve not seen anything.

Bro sometimes erhh it’s not about people turning deaf ears oo. Most of these prophets went to spiritualists to take powers . This makes the people to believe them no matter the circumstances and they are blind folded with the powers given to them

Most of these prophets went to spiritualists to take powers . This makes the people to believe them no matter the circumstances and they are blind folded with the powers given to them

Bro I do get your point but is it everybody that this kind of powers can blind fold? Or let say in a church where by the members are about 1000 and the prophet over there is fake. In such a church even if the prophet goes in for such powers to blind fold the members, there’ll definitely be some few that it won’t work on them but they will foolishly continue to follow them.
One thing I’ve studied is sometimes when such prophets sees that, some few members can’t be charmed, he goes into agreement with them, turning them into his junior pastors and so on to help him fraud the others charmed.

Yh and I don’t know why those people also agree with him on that . If some members are being charmed, what ever someone tells them kraa they won’t believe it . That’s the problem

This is the reason why you shouldn’t be entering any church that you’ll hear of simply because you want a miracle to happen in your life.
One thing many don’t know is, the miracle that you want to happen to you is yourself. If you want a car you need to go out there and work for it, nobody will ship the car to you miraculously. In doing this, that’s where you’ve worked yourself a miracle to get the car you want. You get my point of you being the miracle itself?

Buh you know in our country that the ladies especially this is what they have been doing. Anywhere they hear the pastor or prophet is powerful norrr they are off to that side.

As for the ladies, many don’t learn lessons when it comes into matters like this. Joining this church today, that church tomorrow in search of miracles which ain’t gonna happen and at the end, they get defrauded.

The quickest way of broad day light fraud is placed at the feet of some mushroom churches. It is becoming unbecoming, if we are to equate our churches to salvation then we have a long way to go. The time is now to investigate these churches and close them them before they sell people in the name of winning souls for Christ.

What is happening in our country at all ehhh

This should be instant justice. C’mon, why should this man be heard in the first place? Some of these prophets are not authentic at all. How many ordained prophets are available, just a few, the rest are just joking with something they can’t laugh about in the end. This is really serious hmm ehh