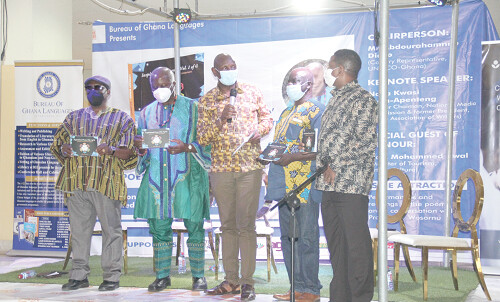 A media consultant, Nana Kwasi Gyan-Apenteng, has urged people to prioritize their local dialects over foreign languages to enable the country to sustain its cultural heritage.

He said in recent times learning and speaking of English as an official language had not only become a privilege but had also created a hierarchy of legitimacy of which the ability to speak English fluently was at the top of the food chain.

In a multi-ethnic society such as Ghana, the consultant said, maintaining dialects of ethnic and cultural groups was critical for the preservation of people’s identity.

Nana Gyan-Apenteng, who is also a former Chairman of the National Media Commission (NMC), was speaking at the launch of a book by the Bureau of Ghana Languages (BGL) in Accra last Sunday.

Titled “Inspirational Poems,” the book is written by Prof. Lade Wosornu and translated into 15 local dialects by the BGL.

According to Nana Gyan-Apenteng, “human beings act in accordance with their perceived self-interest and parents know that in these circumstances their children will have a better life if they speak English. This is why today, even parents who cannot speak English speak it to their toddlers.”

“This behavior, which has taken deep roots in our country, goes against sensible and pragmatic policy advice provided by our own government and experts who say that children learn other languages even better if they start life with their own mother tongue,” he said.

In this era of globalization and contemporary technological challenges, the consultant said it was important for people to recognize that their culture was the basis of their identity and the most important factor in the nation’s human and material development.

He, therefore, said history, cultural values, and institutions must continue to exercise a deep influence on the nation’s destiny, including governance and people’s way of life.

Nana Gyan-Apenteng further suggested that the Ghana Cultural Policy, which was the mother document that consisted of major cultures in the country, needed to be revised and brought into line with the current digital space.

“We know that many languages have died, some in our own country, which is sad because when a language becomes extinct or is spoken by only a few old people, the culture of that language loses its dynamism and eventually dies as well.