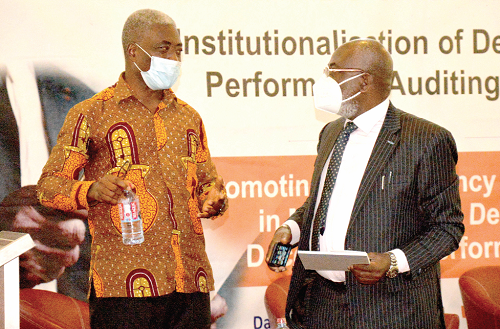 The Audit Service has called on the Public Procurement Authority (PPA) to increase its monitoring role on procurement processes at the Metropolitan, Municipal and District Assemblies (MMDAs).

That, it explained, was because of the poor quality of procurement plans developed by some district assemblies.

According to the Assistant Auditor-General in charge of Performance Audit at the Audit Service, Mr Jacob Essilfie, there was the need to redesign programmes for the assemblies to include controls to enforce compliance.

Speaking at a National Policy Dialogue under the Ghana Strengthening Accountability Mechanisms Activity (GSAM) project, Mr Essilfie noted that of 50 assemblies which were the point of focus under the project, 26 out of 100 projects examined were not included in the procurement plans of the assemblies but had been executed.

The GSAM project, which is being implemented by the United States Agency for International Development (USAID), in collaboration with the government, Care Ghana and the Integrated Social Development Centre (ISODEC), seeks to increase citizens’ capacity to demand accountability from those to whom public resources have been entrusted.

The national dialogue ,therefore, was to allow stakeholders to explore the opportunity to institutionalised value-for-money audits in the public financial management system at the district level and provide opportunity for citizens to monitor capital projects and use the findings to engage district authorities to improve local government transparency, accountability and performance.

Mr Essilfie noted that 16 assemblies which did not include projects in their annual budgets prepared supplementary budgets to include such projects to receive funding during implementation.

“We also found out that 14 of the 16 assemblies which had no projects captured in the assembly’s budget in the given year implemented certain projects because of the decision of a district or municipal chief executive and this is worrying,” Mr Essilfie said.

The acting Mission Director at the USAID, Ms Janean Davis, pointed out that the performance audits had resulted in summoning contractors to complete projects, correct mistakes and conform to specifications in their respective awards.

In a speech read on his behalf, the Minister for Local Government, Decentralisation and Rural Development, Mr Dan Botwe, said the analysis from the performance audit were revealing and called for the efficient and judicial use of resources.

The Country Director of Care International, Ms Rose Tchwenko, indicated that the GSAM project provided a space for multi-stakeholder engagement on lessons from performance audits.

PPA’s in Ghana must monitor the activities of MMDCE’s to enable the country have value for money. The wastage in the system in appalling.