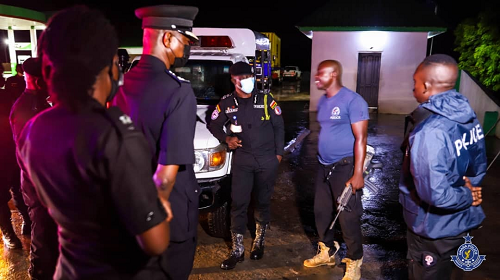 The police have gunned down two suspected robbers believed to be behind the killing of an international journalist on the Buipe-Tamale highway.

The suspects, Hamidu Umaru and another, identified only as Haadu, were killed after a shootout with personnel of the Special Anti-Robbery Task Force on an intelligence-led operation on the directives of the acting Inspector General of Police, Dr George Akuffo Dampare.

The police have also arrested four other persons, who have been identified as Saaju Bukari, Bertor Saabi, Ali Amadu, and Isaad Seidu, in connection with the murder of the journalist.

The journalist, Taalay Ahmed, with the London-based Muslim TV (MTA International), was killed about 6:30 p.m. last Monday during a robbery attack on a vehicle he was travelling on with members of his crew.

They were said to be returning after shooting a documentary.

Another victim, Omaru Abdul Hakim, who was travelling from Tamale to Accra with Ahmed on the Toyota Hiace mini-bus with registration number GT 7405- 16, sustained gunshot wounds when the robbers shot indiscriminately into the vehicle.

The driver, Rahman Baa, was not harmed, however.

The suspected robbers are said to have emerged from a bush at a section of the road at Sarikyekura on the Tamale-Buipe road and opened fire, deflating some of the tyres of the vehicle with some bullets penetrating the vehicle to hit the two.

The armed men fled after robbing their victims of their mobile phones and money.

The injured were taken to the Buipe Polyclinic by the police and later transferred to the Tamale Teaching Hospital, but Ahmed was pronounced dead on arrival.

The acting Director-General of the Public Affairs Directorate of the Ghana Police Service, Assistant Commissioner of Police (ACP) Kwesi Ofori, told the Daily Graphic that the suspects were allegedly involved in a number of robberies and murder cases along the Kintampo-Buipe-Tamale highway.

The special operation, he said, led to the retrieval of two locally manufactured pistols and some live cartridges, machetes, bayonets, pepper spray cans and stun guns.

Other items retrieved from the suspects were mobile phones and motorbikes suspected to be stolen items.

“Preliminary investigations suggest that these suspects were behind many robberies, including the killing of the international journalist, some days ago,” Mr Ofori said.

He said the police had instituted some measures to effectively combat crimes that had plagued the Kintampo-Buipe-Tamale highway and neighbouring communities recently.

ACP Ofori said similar intelligence-led operations were being employed in other regions to combat crime.

He urged the public to collaborate with the police by providing credible information on suspected criminals for immediate action.

"Policing is a shared responsibility. Therefore, we entreat everyone to get involved for a safer and peaceful society,” he said.

That’s how it should be, anytime you offend and they catches you, killing straight and that gonna make them fear… That’s my motto when I come in power as IGP

Good job by the police, killing any robber is eliminating one nuisance from our streets but I hoped they confirmed the ones they gunned down are really ones that killed the journalist.

An eye for an eye. This armed robbers don’t know when to quit. We need to see more like this from the police. Time for ‘negotiations’ is over.