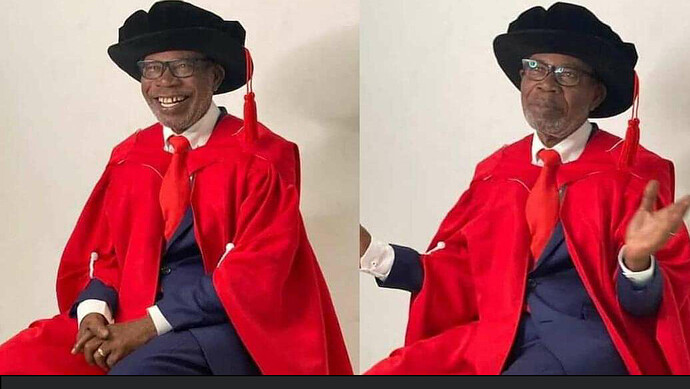 What may have started to some as an ordinary desire to acquire academic laurels for the sake of faster rise in the corridors of political power, will today go down in the history of achievements as an inspiration to generations yet unborn.

Graduating for his first degree at age 64 years, MBA at 67 years, and a PhD at 75 years, we celebrate Ghana’s former Ambassador (High Commissioner) to South Africa, Dr. George Ayisi Boateng for a feat worth etching in gold and telling for many years to come.

Dr Ayisi Boateng with his family

Known to his numerous admirers as “Onipa Nua”, Dr. Ayisi Boateng started humbly as a media philanthropist who would readily help media men in Kumasi get around with free gallons of fuel from his petrol station at Asafo. When he opted to pursue a university education, many of his classmates were way younger than his children. He would brush shoulders with them as peers and turn around to help them with free fuel as a father.

Today we celebrate “Dr. Onipa Nua” as an icon in history and a beacon of hope for his luminary achievement. We pray his achievement will go a long way to concretize the government’s effort at getting every Ghanaian youth to go to school.
Ayekoo Onipa Nua!

Wow, congratulations to one of Ghana’s illustrious sons. He has Seen it all in life.at age 75, he still persues his dream goal of getting a PhD . The time I will get even masters will be a great achievement for me