Ghana’s boxing legend, Ike ‘Bazooka’ Quartey, has said that young fighter and Olympic Games medalist, Samuel Takyi, has a huge decision to make about his future.

The 20-year-old fighter has been torn between going professional and staying in the amateur division after winning bronze at the Olympic Games in Tokyo.

In an interview with Graphic Sports, the legendary Ike Quartey said the decision has to be left with Samuel Takyi after his magnificent achievement in the sport. 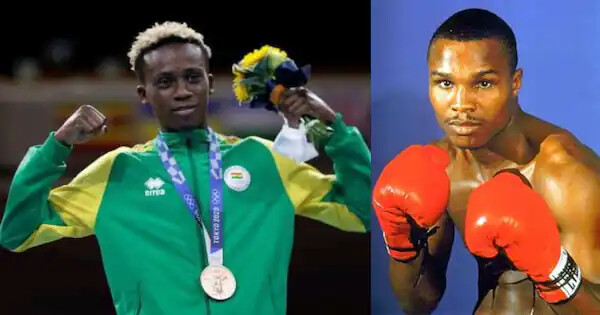 Ike Quartey participated in the Olympic Games in Seoul in 1988, and failed to win a medal but made the decision to go pro afterward and he ended up becoming one of Ghana’s best boxers in history.

He admitted winning an Olympic medal is a great achievement, something Samuel Takyi should be proud of.

While Samuel Takyi joined greats like Clement Quartey, Eddie Blay, and Prince Amartey as medalists from the Olympics, Ike Quartey had an enviable boxing career, where he competed 42 times, winning 37, with 31 victories through knockouts.

In the photos shared on Facebook by Joy FM sports presenter, Nathaniel Attoh, Quartey is seen dressed in fine kaftan as he hosted the sports journalist in his office. The first of the photos had the former world champion showing a fist as he posed with Attoh.

In the second, he seemed to be showing some documents to Attoh. The third had Quartey seated behind his office table while making a call.