Olympic Games: Sulemanu Tetteh qualifies to Round of 16 in boxing 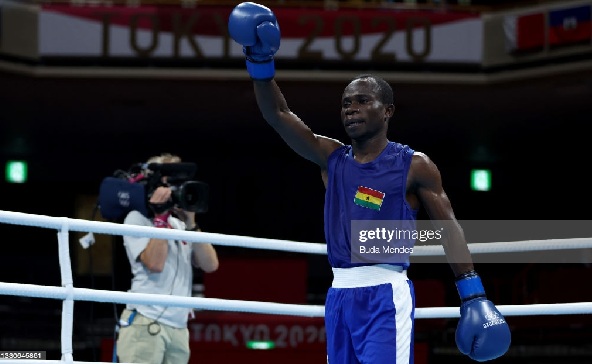 Ghana’s Sulemanu Tetteh recorded a split 3-2 decision victory over Dominican Republic’s Marte de la Rosa Rodrigo in their flyweight division bout last Monday to book a spot in the Round of 16 in the ongoing Tokyo Olympics boxing event.

The Black Bombers captain started slowly but gradually warmed himself into the fight, winning the last two rounds after falling behind in three of the five judges’ scorecards in the first round.

Three of the five judges scored in favour of Tetteh, while two scored for Rodrigo.

The 2012 London Olympian, Tetteh, progresses a step closer to the medal zone.

Meanwhile, the other two Ghanaian fighters, Samuel Takyi and Shakul Samed, are both scheduled to fight today.

Takyi, a featherweight boxer, will take on Ecuador’s Jean Carlos Pachito Caicedo at the Round of 16 clash, having drawn by in the preliminary stage.

Samed, on the other hand, will make history as the third brother to feature at the Olympics after Bastie Samir and Issa Samir participated in the 2008 Beijing edition when he takes on Turkey’s Bayram Malkan.

Team Ghana is confident of winning a medal for the country. The team pitched camp in Japan three weeks to the commencement of the global sporting tournament.

We have boxers in Ghana ooo , and they are making the mark in the Olympics games ongoing in Tokyo . Sulemanu and his brother Takyi raising the flag of Ghana high in obimanso . Congrats to them.

This is impressive from our team in Tokyo. Great job done by Sulemanu. We are solidly behind them. Wish the rest of the guys success in their remaining fights.