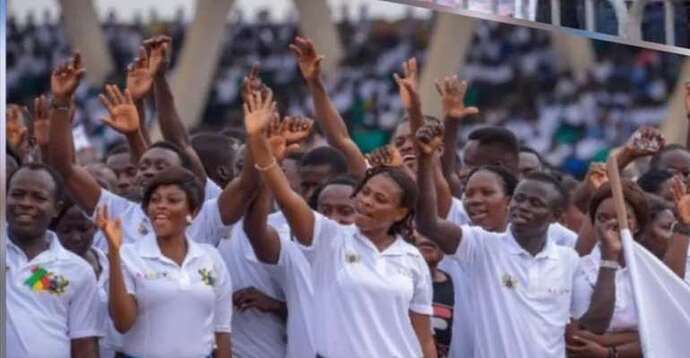 Some 40 NABCO trainees in Nzema West of Jomoro Municipal District have been given permanent employment.

These trainees have transitioned into their chosen careers since their deployment into the programme aimed at preparing young people for the job market.

Mr. Ernest Kofie, the Municipal Chief Executive (MCE) for the area who disclosed this at the first-ever ‘Meet The Press’ series at Half Assini Senior High School’s Assembly Hall, commended President Akufo-Addo for introducing NABCO to reduce the unemployment situation in the country.

He said transparency and accountability are among the key tenets in every democratic dispensation.

The MCE added that accounting to the people is a mode of achieving objectives of good governance.

He noted that the media is the means through which good governance can reach the citizenry.

The MCE said the municipality received two hundred and ninety-eight (298) trainees last year, out of the total number, 199 were males and 70 were females.

“I am happy 40 trainees have gained permanent employment and this is good news and in fact, President Akufo-Addo has done well”, he said.

He entreated the rest of the trainees to work hard and endear themselves to authorities.

He said they should be happy about their allowances, adding that the amount was better than none.

The MCE urged the gathering to embrace the Nation Builders Corps for its achievement.

NABCO is a government initiative intended to address graduate unemployment in the country.

The focus of the initiative is to provide public service in health, education, agriculture, technology, governance and drive revenue mobilization and collection.

Hundred thousand unemployed graduates have since been recruited into the flagship programme.

They receive GHC700 each every month as remuneration.

I think the nation builders corps are really benefiting fromantic this program. Moving from a temporary worker to permanently holding an official role in the area you are serving is nothin but great relieve

The government must sustain this and continue to absorb some into permanent places. Great job so far

It’s about time , congrats to these first 40 , I hope more will come in the future , give us job and see the country fixed that simple , you cannot tax an unemployed person we are not buying anything la