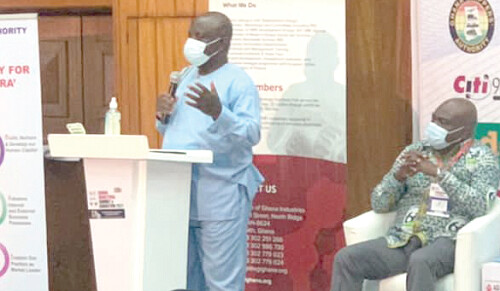 The country’s nuclear power program is estimated to generate $1.2 billion from local industry participation during the implementation of the project.

He was speaking at the recently held Ghana Industrial Summit and Exhibition programme in Accra. He said a country that was beginning the nuclear project was expected to generate at least 20 percent local content and participation.

Prof. Nyarko, who is also the Vice-Chairman of the Ghana Nuclear Power Programme Organisation (GNPPO) and the Board Chairman of Nuclear Power Ghana (NPG), also said the International Atomic Energy Agency (IAEA) approach to a newcomer country that was undertaking nuclear power programme needed to address 19 infrastructure issues, one of which was industrial involvement.

“And so, if we are talking about an industry that is going to cost about $6 billion, you can estimate how much benefit local industries in the country will derive from the programme," he said.

The implementation of the nuclear power project will generate a lot of local content in the areas of engineering, manufacturing, civil construction, and assembling services, among others.

He, however, said the country’s ability to fully participate in the project would depend on the capacity of the local industry.

Prof. Nyarko called for the deepening of the partnership between the Association of Ghana Industries (AGI) and the GNPPO to prevent reliance on foreign companies for goods and services in building the power project.

"Once Ghana is on the path of adding nuclear power to its energy generation mix, it is essential that the capacity of Ghanaian-owned industries is built so that they do not lose out”, he said.

“When it comes to nuclear, some standards and specifications must be met, and so local industries must be well equipped to benefit from the implementation of the nuclear power project," Prof. Nyarko added.

The generation of electricity from nuclear power is estimated to cost between five and eight-cent per kilowatt-hour (kWh), according to a pre-feasibility study by the Nuclear Power Institute (NPI) of the GAEC.

Current generation sources provide between 16 and 18 cents per kWh.

Ghana’s nuclear effort started in the 1960s but suffered many setbacks mainly due to public misunderstanding of the sector.

Although power generation is the bigger goal for the country’s nuclear energy programme as set out by the country’s first President, Dr. Kwame Nkrumah, nuclear science and technology are already being applied in many sectors of the country’s economy, including food safety and preservation, and in the health sector.

Is the project really feasible here?

Yes, it is. Our late president, His excellency Dr, Kwame Nkrumah laid the foundation. The resources might be a problem but we can if we want to

Well then, we live to see.

I just hope this is not another plot just to drain the country for their own interests. We’ve been on this road before,with regards to other projects.

Great piece and insight. Let’s pray it see the light of day

Let’s pray it see the light of day

Ghana we’ve prayed saaaaaa nothing. How many projects have seen the light of the day so far? It’s sad but the truth is this will get nowhere if we the youth don’t get up and fight.