‘No Thomas, no Partey’ – FIFA react to Ghana’s win over Zimbabwe

Thomas Partey’s match-winning exploits for Ghana against Zimbabwe have caught the attention of FIFA and his club, Arsenal. 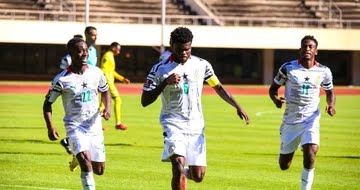 ‘No Thomas, no Partey’ – FIFA and Arsenal react to Ghana’s win over Zimbabwe

The midfielder scored the only goal of the game as his country beat the Warriors 3-1 in Harare on Tuesday afternoon.

Partey, who captained the Black Stars against Zimbabwe following Andre Ayew’s relegation to the bench, scored from a free-kick in the first half.

This was the 28-year-old’s second goal against the southern African nation, having scored against them in the reverse fixture in Cape Coast last Saturday.

In the aftermath of yesterday’s match, Arsenal and FIFA both took to Twitter to praise the midfielder for his performance.

FIFA also wrote: “'No Thomas, no Partey,’ sing the Ghana fans. Today they had Thomas. Today they have a party. Thomas Partey’s free-kick earns the Black Stars a decisive victory in #WCQ.”

The Arsenal midfielder has now scored 12 goals for the Black Stars, having made his debut just six years ago.