The crate challenge that has been causing a commotion on social media has been tweaked by a man’s new display.

In a viral video shared by Tringlobe Media on Facebook, the man, instead of walking on piled crates, lifted his. 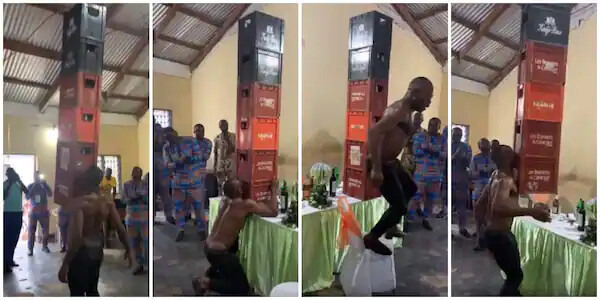 The man however lifted the crates with just his teeth. In the incredible video, 6 crates were lined up on a covered table.

The unidentified man after doing some weird dance moves proceeded forward and carried at once the crates without the use of his hands.

Guests were left awestruck as they watched the man move around with the crates lifted by his teeth before dropping them back on the table.

Meanwhile, YEN.com.gh previously reported that a young lady had walked on bottles in a stunning attempt at replicating the crate challenge.

In the video that was shared on Instagram by @krakstv, the young lady walked on nine bottles that were placed on a staircase and table.

She stepped on one bottle after the other with utmost carefulness as people gathered to watch her display amazing skills.

Onlookers could be seen watching her closely and as the lady got on the table, they gave her a round of applause.

Wow, some men are even stronger than Samson in the bible. This is incredible

It’s not stupidity bro @Samini it’s called talent. The man is very talented lifting crates with his teeth How many people can do that. Let’s be truthful that’s incredible

If this was to be a white man doing it, like by now he will be all over the world with we Africans applauding. Yet our fellow black man is the one doing it and some people are saying it’s stupidity. We should learn to appreciate our own cos nobody will come from elsewhere to do that for us.

Sure that is an amazing talent that guy has got he deserves to go viral worldwide. He must go far with such talent

Shame no dey catch you??

It’s called madness, someone who is in his/her normal sense won’t do dis gyimi

My bro, I won’t appreciate dis kind of talent