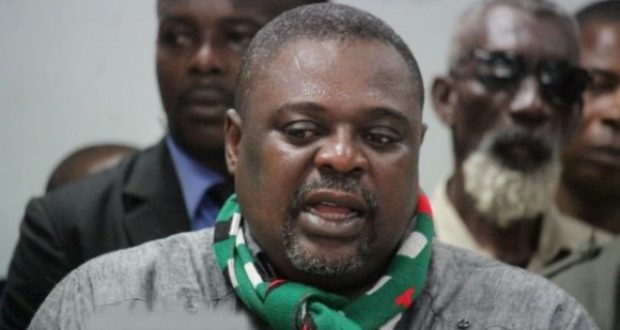 In a letter to Mr. Anydoho sighted by Citi News, the NDC said it found Mr. Ayindoho guilty of “misconduct and anti-party behaviour.”

“The Functional Executive Committee (FEC) acting in compliance of article 48 (1) of the NDC Constitution unanimously adopted the report and accepts full responsibility for your expulsion from the Party,” the letter added.

Mr. Ayindoho had been serving a suspension that begun on February 8, 2021, after his consistent criticism of the party.

Some NDC members had been complaining about Mr. Anyidoho’s conduct and called for him to be expelled.

The NDC said Mr. Anyidoho cannot be “recognized as a member of the party and cannot carry [himself] as such.”

He has further been directed to return any party property that may be in his custody.

“You shall also forfeit any money, dues, or subscription fees that you may have made to the party,” the NDC indicated to Mr. Anyidoho.

This guy is a snitch… Americans will say!!!
How can you belong to a political party and be castigating the party every now and then. He should go form his own political party.Yaaabrreee nuu kuraaaa

The NDC has tolerated him enough. This expulsion should have been done long ago. When you are part of a group or an association, you must do your best to conform to its values, principles and ideologies. Koku in recent times has exhibited the opposite of those. He deserve what he got.

Dear NDC, why sack him from the party when he already left the party long ago. His actions proved beyond doubt that he no longer Love the NDC but supports NPP. Allow him to join his NPP in peace.

His dismissal from the party is unnecessary to me , when he doesn’t agree with code and conduct the party might he just stay mute, his disagreements with party customs is what has lead to his removal and I think that’s a wrong move,

How can the part stay mute when his behavior is incongruous with the party laws? This will be a breeding ground for people to misbehave. The rules are clear. You break them, you pay the price.

We have given him the green light to form his own political party. There, there will be no rules of engagement, no codes of ethics; absolutely everything goes.
And let see how that party will survive…