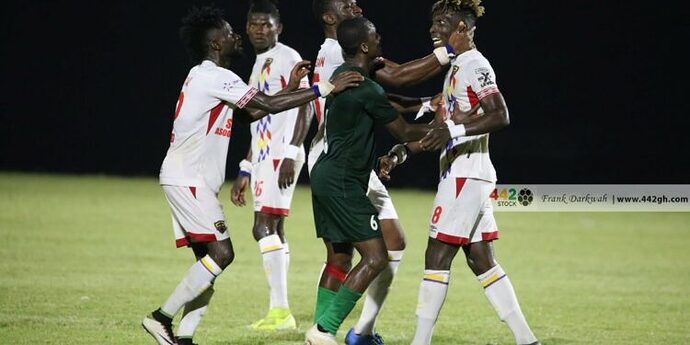 Hearts of Oak remain in contention for a domestic double as they progressed to the semi-finals of MTN FA Cup on Saturday night.

Caleb Amankwah scored the only goal as the Ghana Premier League champions edged Elmina Sharks 1-0 at the Nduom Sports Complex.

The 23-year-old defender curled a superb freekick over the wall into the back of the net in the second half of extra-time.

The Phobians become the second club to reach the last four, joining Ashgold who beat Kintampo Top Talent FC earlier in the day.

The final four teams will be known after Sunday’s games. Kotoko must overcome Berekum Chelsea to be part while Medeama take on Attram DeVisser in Tarkwa.

The Semi-final encounters are pencilled for July 31 and August 1 with the two games taking place at Cape Coast Stadium.

It doesn’t matter whether it was extra time or additional playoff, hearts of Oak sailed through to the quarter-final of the MTN FA CUP. Elmina sharks are usually unbeaten in their home grounds. They are a tough team too. Congrats to hearts for winning with the only goal in the game

Seems like Hearts of Oak, are on the verge of a domestic double and I’m really excited, not long ago, we had a weak team and was struggling to win games… but now seems the managements working well now