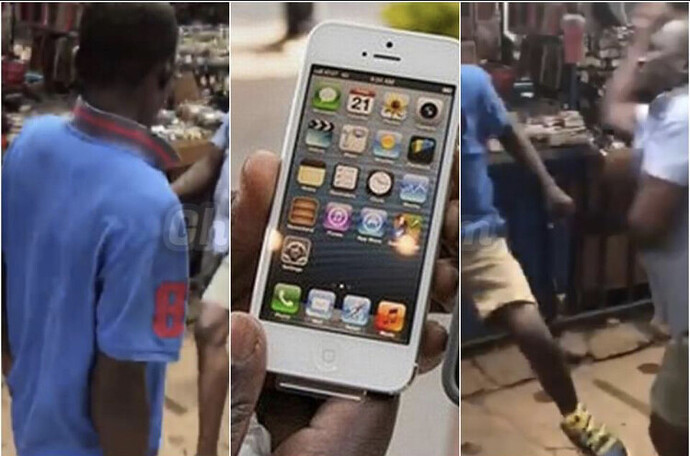 A man who fell victim to the famous shenanigans perpetrated at Kwame Nkrumah Circle stormed the place to engage in a fierce fisticuff with a mobile phone vendor.

From the online www.Ghbase.com gathered, the angry man was hoodwinked after he was given a tile instead of the mobile phone he had paid for. Upon realizing the anomaly, he went back to the guy to confront him on why he confidently tricked him.

The other guy said he has no idea of what he was talking about when tension built up as they exchanged words, they settled the issue with fierce combat. Onlookers cheered them on instead of separating them.

Other tweeps suggest the incident occurred at Adum PZ in Kumasi, another notorious place where customers are ofter shortchanged.

, I just love this city and its characters. He should use the tiles to build his house erh

. I think the country is a platform set for a comedy show and the comedians are members o parliament and your president and we are the audience

. Because I just can’t think far

He make lucky saf to get that

People are get key soaps and they are not even complaining. He’s able to get quality ceramic tiles and still discontent. You want to buy phone in cycle, go straight into the main shops to buy. Those standing by the road will show you.

Dem take do me before ooo

. Buh I learnt my mistake

I beg, I might be new to this, what’s a moment man before I lay down my comment?