MMDCE appointments will be resolved this month – Akufo-Addo 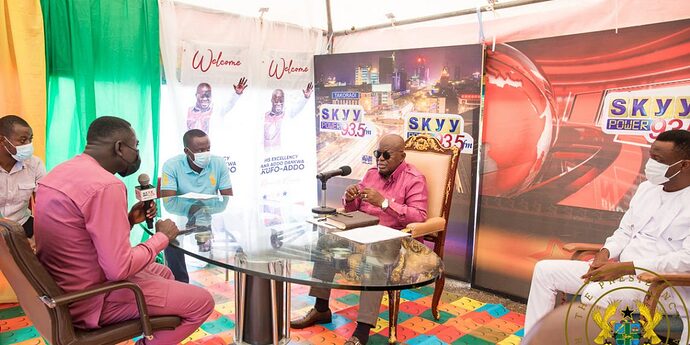 President Akufo-Addo has indicated that the list of Metropolitan, Municipal and District Chief Executives (MMDCEs) will be released this month.

“This month of September, all these matters will be resolved… in the course of this month, it will be done,” President Akufo-Addo said in response to a question on the matter in an interview with Skyypower FM in Takoradi as part of his tour of the Western Region.

He said the necessary consultations were ongoing to pick the right persons for the assemblies.

The official position of the presidency on the delay in appointing MMDCEs has been that it is not hampering development at the local government level.

Speaking on the delay, the President said “there is the need for broad consultations and that is what I have done. We have set up committees at the regional and national levels to make recommendations for me.”

“I have to really make sure the recommendations fit the political purposes of the government and respond to issues of competence, political suitability and all of these things.”

The appointment of MMDCEs is the sole preserve of the President, per Article 243 (1) of the 1992 Constitution.

At the moment, the government has been criticised for the lack of progress in appointing new MMDCEs eight months into a new administration.

In January, President Akufo-Addo directed all MMDCEs to remain at post until new ones are appointed.

This has since prompted a legal challenge.

The South Dayi MP, Rockson-Nelson Dafeamekpor, dragged the government to court over the continuous stay of MMDCEs in office eight months after a new administration came into office.

According to him, President Akufo-Addo has no constitutional mandate to direct MMDCEs to remain in office in an acting capacity.

He also wants the court to order the acting MMDCEs to immediately vacate their post.

Glory be to God oo.

Addo dee is at it again. It’s a been almost a year since elections and districts and municipalities in Ghana are still without Representatives. How then will develop happen in these places. We are all told that MP’s don’t do developmental projects but rather MMDCEs. So why the delay?