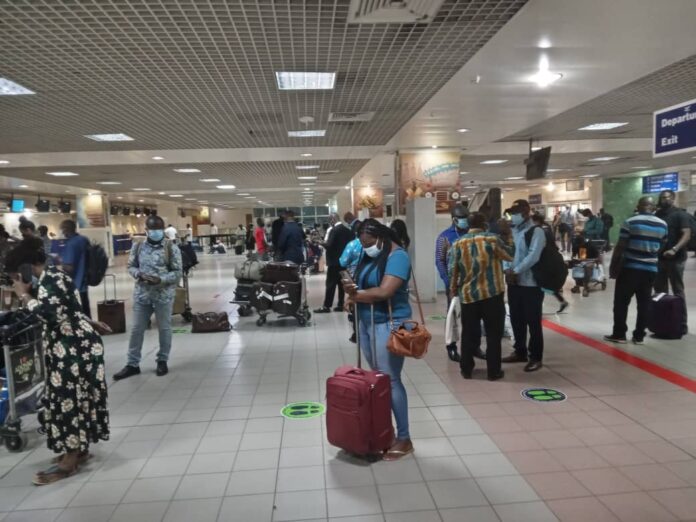 The Minority in Parliament is demanding a probe into claims of fake Covid-19 results for travelers at the Kotoka International Airport.

The demand follows the circulation of some viral videos of some travelers contesting the positive COVID-19 results from Frontiers Health Services.

Speaking to the media, a Minority Spokesperson on health Kwabena Minta Akandoh asked for a second opinion on the results of the travelers contesting their positive results within a week.

The Juaboso MP condemned the attempt to use security personnel to harass the victims.

Mr. Akandoh further admonished Frontiers which conducts the testing at the KIA to reassess their regime.

“Our attention has been drawn to the fact that a lot of travelers who are going through covid testing at the Kotoko International Airport are doubting the results of those tests.

“Videos and audios have gone viral to that effect and it will be irresponsible on our part as a minority to say due to that government must stop doing the testing at our entry point.”

He went on “notwithstanding, we will recommend to the government [health and transport ministers] within one week to as a matter of urgency put their heads together and come out with a measure that will afford those who are doubting their Covid status an independent opinion of their status. if possible at their own cost.”

He suggested “we have noticed that there are a number of Covid centers within that same catchment area. We have the Immigration Clinic where we have the Covid testing center, Airpot Clinic, Nyaho, and some other labs within that particular enclave.”

“It’s a huge concern, in the initial stages we thought that no matter what, we could have one or two people complaining about the system so you thought it was normal, but I think it is becoming too many and therefore we just have an alternative to this particular situation. But for now we will give them the benefit of doubt to call for an independent alternative to double-check.”

If the land borders are still closed, why have they opened the airports? Are we more scared of the people that will enter into the country by land than by air? I think they brought this upon themselves. It’s possible the test kits used are even expired.