Military hospital in Kumasi to be ready December BY: Daniel Kenu 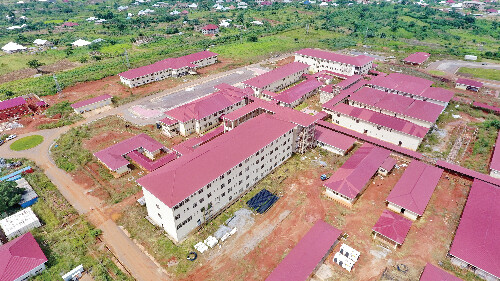 The military hospital currently under construction at Afari in Kumasi is on schedule to be completed this year, the Ministry of Defence has assured.

With work done so far estimated to be 92 percent, the Deputy Minister of Defence, Mr. Kofi Amankwa Manu, said there are hardly any anticipated hitches given the relevant arrangements regarding the remaining works.

At a news conference in Kumasi yesterday, Mr. Manu debunked claims that some essential medical equipment meant to be installed at the 500-bed hospital had been left at the mercy of the weather.

He said the magnetic resonance imaging (MRI) and x-ray machines supposedly left on the sun and the rain was not even on-site at all.

“Those machines are currently at a bonded warehouse in Tema,” he emphasized.

The news conference, which was preceded by a tour of the site and installations of the hospital, was prompted by recent media content, including a viral video, which suggested a certain poor state of the supposedly completed hospital.

Mr. Manu said the $199 million project was still under construction and being manned by the main turnkey contractor, Euroget De-Invest, an Egyptian investment company.

The hospital has among other facilities 50 medical and non-medical buildings, 15 operating theatres, two endoscopy operating rooms, nine delivery rooms, a 153-body capacity mortuary, 64 staff housing units, a medical gas plant for the production of the medical gases, and a sterilization department.

A high-powered delegation from the ministry, the military command, the Ashanti Regional Minister, Simon Osei-Mensah, and the Member of Parliament for Atwima Nwabiagye South, Mr. Emmanuel Agyei Anywhere, along with the media were conducted around the facility by officials of Euroget led by the Resident Engineer, Mr. Abo Shamaa.

The Deputy Minister assured the public that the supervising Ministry of Defence would ensure that the right things were done to have the hospital ready by December.

He said the delay in completing the project had been occasioned by various factors, including the changing of the site for the hospital from three different places.

He said, for instance, it was only in 2017 that the contractor was granted the necessary tax reliefs for the construction processes although such conditions should have been fulfilled from the onset.

Meanwhile, the Chairman of Euroget De-Invest, Dr. Said Deraz, has explained that the equipment captured in the viral video were items that had to be installed outdoors.

A statement issued by Dr. Deraz described as misleading and false the video suggesting that the facility had been completed and left to rot in the bush, while some equipment had been left to rot at the mercy of the weather.

The Chairman said the construction was still ongoing with overall progress at about 92 percent complete.

Indeed, workers were still on-site at the time of the tour, with officials explaining that finishing touches to some installations were ongoing.

Dr. Deraz’s statement explained also that the extractor fans and air handling unit that were covered with polythene sheets were shown in the video as medical equipment.

It explained further that the extractor fans and air handling units were outdoor items and were not wrong to be where they were in the open space.

“No medical equipment has been exposed to the weather, and the video should be ignored in its entirety,” he said.

Euroget De-Invest was awarded the contract to build nine hospitals for the government of Ghana.

These were the 500-bed military hospital in the Ashanti Region, two regional hospitals in Wa and Kumasi, and six district hospitals in Konongo and Tepa in Ashanti, Kwabenya in Accra, Salaga in the Savanna Region, Twifo Praso in the Central Region, and Nsawkaw in the Bono Region.

The projects form part of an initiative to promote social development and welfare in West Africa.