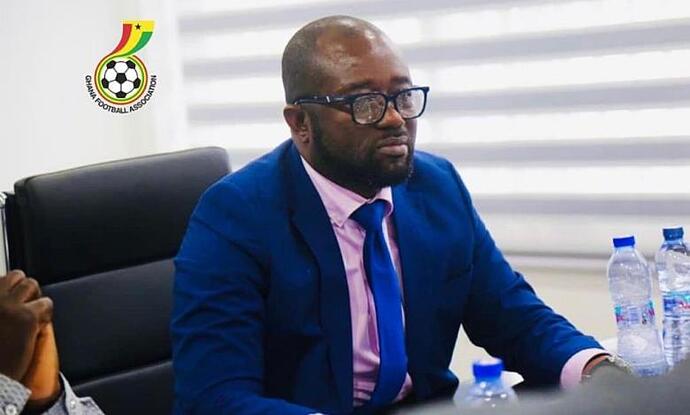 The football-association-to-enroll-players-on-(GFA) has presented supporting materials to help the Criminal Investigation Department (CID) of the Ghana Police Service to effectively probe alleged match-fixing in the game between AshantiGold and Inter Allies.

The president of the GFA, Kurt Edwin Simeon-Okraku presented the materials after meeting with the Director-General of the CID, [COP Isaac Ken Yeboah]

The meeting was to officially inform the police about the alleged match-fixing and betting that hit the Ghana Premier League match-day 34 fixture between AshantiGold and Inter Allies at the Obuasi Len Clay stadium.

Simeon–Okraku called on the Ghana Police Service to as a matter of urgency put in place a competent team to get down to work.

“Looking at the severity of the matter and its implications on the football industry, it has become very necessary for the investigations.

“We need to do this to save the sport that we all cherish and adore. We cannot sit down unconcerned and allow a few individuals to destroy our football,” he said.

He added: “As the leader of this football family I would like to mention that we have already begun the sporting investigations and wants the police to handle the criminal part as stated in our initial statement to the public.

“We need to act and I believe that this is the right time to delve into such matters to restore the needed public confidence in the product.”

COP Yeboah promised to form a team made up of officers from various units within the Ghana Police Service to look into the matter.

He pleaded with the media not to give pressure to impede the process and that Investigations will be thorough and the media will be updated only when required.

COP Yeboah also assured that the Ghana Police Service will work hand in hand with the Ghana Football Association to bring the matter to a logical conclusion.

The GFA president is working. He is very determined in making sure the people involved in this match fixing are punished. I hope this will deter people cos chale wanna bet dey spoil too much.

Don’t the gfa have a committee for things like this, the police have a lot on their plates to be focusing on this. I believe there should be a department or cases like this in the gfa and the gpl committee too.