Match-fixing: AshantiGold and Inter Allies to be demoted into lower divisions - Reports 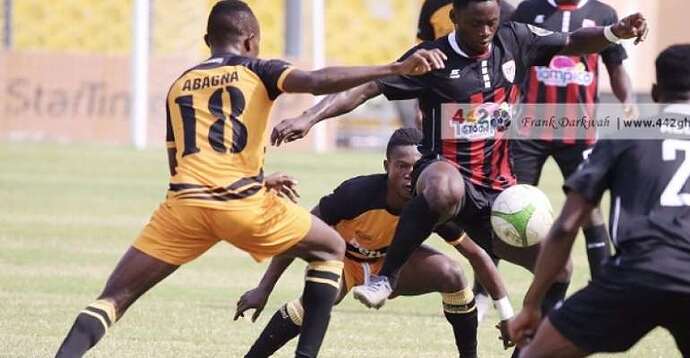 According to local media reports, AshantiGold SC and Inter Allies are likely to face demotion into the lower divisions with investigations still ongoing.

Both teams have dominated the local media for the wrong reasons after their final game of the 2020/21 Ghana Premier League game.

The Miners recorded a shocking 7-0 win over relegated side Inter Allies at the Len Clay Stadium.

The centre-back narrated that he intentionally scored the two own goals because they were told the game is placed under a bet on a correct score of 5-1 reason he netted those bizarre own goals.

"Before the start of the game [against AshantiGold SC] at our hotel, I heard that the game has been fixed to end in a 5-1 win in favour of AshantiGold SC.

“I decided to spoil the planned outcome of the fixture by scoring two own goals,” Musah told Kumasi FM.

"I am a Muslim and I don’t support betting because it’s against our doctrines.

''I later told my coach Felix Aboagye before my introduction in the second half that I’ll spoil the planned 5-1 win for AshantiGold SC. I was congratulated by the team after the game," he added.

On Monday, both teams have been charged by the Ghana Football Association [GFA] and are currently under check after been alledged of playing a fixed game over the weekend.

The two sides have released statement to deny those allegations with serious investigations still on course and are both likely to face demotions into the country’s fourth and fifth tier with huge fines should they be found guilty.

AshantiGold SC finished the season on the 9th position with 45 points, while Inter Allies got relegated having ended at the bottom of the league with 26 points.

Eeei just like that? You see why the league needs total overhaul? The teams are not honest, the administrators are also into bad management of the football institutions.

I’m happy the decision to relegate both corrupt and unprofessional teams will be reached. Matching fixing is bad for the game

This is totally appalling. Two teams playing but deep within them , someone has sold the match and another bought the match. So they were just playing smart one on their teaming supporters. This is a crime and the laws of the FA must deal with them.

Hmm I’m even surprised at both teams for such unpredictable and unprofessional behavior. The laws of the FA must deal with them ruthlessly to serve as deterent to others. Bad attitude for the game

The punish seem about right considering if they had made away with it, it’s really absurd how dishonesty drives the game of football. Something has to be done about it