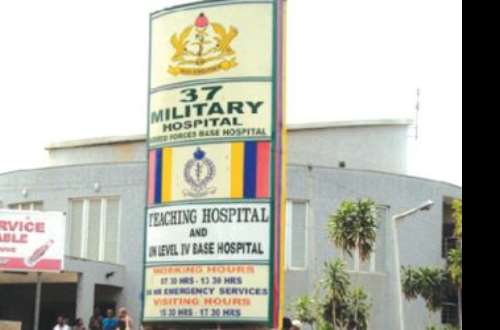 Brother of a patient who died at the 37 Military Hospital is suing the hospital over what he describes as ‘medical negligence’.

Emmanuel Asare Kumah said he is taking the action because the doctors’ negligence led to the death of his invalid brother, Solomon Asare Kumah, and, to worsen matters, medical bills were ‘overpriced’.

Recounting the experience the family went through before the death of his brother in an interview with Johnnie Hughes on the New Day show on TV3, Thursday, September 9, Mr Kumah said he is suing the hospital and the parties joined because he believes there are medical ethics that ensure that when a patient visits any medical facility in the country, there is the need for due care in taking care of the patient with their rights respected.

He said if a patient goes to any of the health facilities and as vulnerable as they are, they are taken advantage of, leading to their death, then there is the need to take the system on so that what happened to that patient will not happen to anyone else in the country.

Mr Kumah said that is the main impetus for going to court.

He narrated the ordeal his deceased brother went through at the hands of doctors before his death.

He said their father was sick and in comatose at the Korle-Bu Teaching Hospital, so his brother Solomon who was living in the United Kingdom came to visit him in Ghana.

He said the hospital admitted him and ran a CT scan on him that detected a tumour in the head of Solomon and thus referred him to the 37 Military Hospital.

He said due to the challenges they faced at Korle-Bu Teaching Hospital when his father was admitted there, it came as a relief that Solomon was referred to the 37 Military Hospital for treatment.

“So when my brother was admitted at 37, the receiving doctor was Col. Appiah and he was the consultant surgeon at the time so he met the family, in the persons of his sister and brother-in-law. He told them that he was going to charge GH¢40,000 for the surgery, with the explanation that it was an emergency he needed to take care of,” he recounted to Johnnie Hughes.

He said Col. Dr Appiah pointed out to them that if they were able to provide GH¢25,000 of the total amount, the surgery will begin on the following Monday.

He said on Sunday, the family had put together the GH¢25,000 and duly paid to Col. Dr Appiah for the surgery to begin the following day but on that day the surgeon gave the excuse that he needed to reschedule the meeting from Monday, August 26th to September 2, 2019.

“His explanation was that he didn’t have all the supplies. He needed surgical glue. So I just went on my phone and googled surgical glue and I sent the picture to my sister and my sister also sent it to him to confirm that ‘is this what you need and he said yes’. So in the States, we just purchased it online through a pharmacy and we told him we will be able to send it to him as soon as possible. So he now postponed the surgery from the 2nd to the 9th of September, so on the 7th of September we had somebody who was leaving the States to Ghana so the surgical glue was given to the doctor. The one who received it was called Corporal Awumey at the 37 Military Hospital. So, he received that because we had a Reverend Father who was leaving the States to Ghana. So right from the Airport my sister just met him and brought it to the hospital,” he recounted.

He said after receiving the surgical glue, they expected Col. Dr Appiah to begin the surgery on his brother after he had been administered with anaesthesia but the doctor postponed the surgery again, saying the surgical drill he was going to use was not functioning.

He said the doctor didn’t even touch his brother because he said the drill was not functioning thus the surgery was aborted even though his brother had been administered with anaesthesia.

Mr Kumah said Col. Dr Appiah postponed the surgery from September 9th to the 13th and on the 13th of September, the doctor came back to tell them he was not ‘feeling too well’ so it was on the 16th of September that he undertook the surgery on his sick brother.

But halfway through the surgery, when he had split his brother’s head open, he realized again that the surgical drill was not functioning.

He said at this point the doctor had harvested some fat tissues to be used in the surgery so he plastered the fat tissues in his head and sutured the head back without removing the tumour and was taken back to the neuro ward.

“So back to the ward, everyone was angry. So when my sister went to the ward with her anger and everything, she noticed that my brother’s leg had swollen so she alerted the nurses to it that ‘hey my brother’s leg is swollen, what’s up with this?’. Prior to that we had run a couple of tests and it was negative so this time around, after my brother’s leg was swollen and they ran the doppler test and they realized that he had DVT(Deep Vein Thrombosis), it’s a blood clot.Then we notified the doctor about it and he realized that we had to go to Korle-Bu, to the Cardiothoracic Center to do what they call IVC Filter to be able to take care of this clot. It costs $5,500. You have to pay before they do this procedure and so at the time, my sister negotiated with the doctor,” he recounted.

He said when Col. Dr Appiah realized that they could pay the bill to do the IVC Filter, he told them that he was going to increase the original amount of GH¢40,000 because he feels they have money.

He said later the doctor gave them a receipt for the GH¢25,000 paid to him in the name of another hospital called Victoria Surgical Place.

He said they realized other clients had the same experiences like theirs when they lodged a complaint at the Military High Command because the whole charge was at the behest of the doctor.

Mr Kumah said the surgery came on after the IVC Filter and was taken to the ICU (Intensive Care Unit) at the 37 Military Hospital.

He said the doctor made a referral that he needed a CT Scan but the CT Scan was not functioning.

They had to go Sunshine Health Care at the Airport Residential Area for the CT Scan when invalid patient was on life support.

“We were buying medications, we were buying IV fluids and stuff and if you calculate let’s say ten bags, it is supposed to last you for three days but then we were buying them double so they noticed it at the pharmacy. So they printed a whole list of all the drugs I bought at the pharmacy from the time that we were there. And cough mixture for example, we buy cough mixture today, tomorrow we are buying cough mixture again. So I asked the doctor and she was like they use the syringe to administer it through the feeding tube and sometimes it spills and all that, I didn’t buy that,” he said.

He said at this point he realized that there was something happening so he became vigilant. So, one time they said his brother needed blood and he made his old school mates and his Catholic Church donate blood for him but when the doctor went for the blood for his brother, they told him there was no blood, which got on his nerves.

He said he started checking online for help and someone gave him a number to call so that he can get blood from that person.

He contacted this guy called Awuni in the ICU and he requested GH¢400 and the next minute the Awuni guy brought him the blood.

“There was one time my brother had an issue. I went there to visit. I think it was October 20th [2019] and they said the trachea tube connected to him had a problem so they took it out and they suctioned it so when they fixed it back the fluid went through his skin. And when it went through his skin and they connected it to the ventilator it bloated him so when I went, Dr Kuti, who was in charge, met me with Dr Mariama but all throughout the time I was going to the ICU, Dr Mariama was the one that I was seeing, we never saw any specialist or senior doctor.

“So he said ‘oh when we were inserting the tube it went through my brother’s skin and when they connected the ventilator it bloated him, so don’t be scared, don’t be alarmed. When I went there and I saw my brother, his face was swollen but I had seen him the day before and he seemed to be getting better now he is all bloated. I was so pissed off so I went home and calmed myself, the next day when we went there my brother died. When I went there they said my brother had died of cardiac arrest, as if somebody is so naive,” he alleged.

He pointed out that the doctors didn’t show an autopsy report to show that his brother died of cardiac arrest and when he went to the morgue to see his brother, they told him they were having a meeting so he couldn’t see him.

He said the next day after his brother died, they brought the bill which had been doubled. He said he had receipts that he went through to verify but the hospital had inflated the price.

So he said ‘oh when we were inserting the tube it went through my brother’s skin and when they connected the ventilator it bloated him, so don’t be scared, don’t be alarmed. When I went there and I saw my brother, his face was swollen but I had seen him the day before and he seemed to be getting better now he is all bloated

Look at this traumatic experience families have to go through in the hospital. 37 , Ridge, Achimota and so many hospitals in Ghana kill patients and go Scott free cos the law protects the doctor from some of these unprofessional practices and carelessness. It’s about time people, when they take their members to the hospital record everything that goes on for the sake of evidence.

Look at this traumatic experience families have to go through in the hospital. 37 , Ridge, Achimota and so many hospitals in Ghana kill patients and go Scott free cos the law protects the doctor from some of these unprofessional practices and carelessness.

Autopsy could serve as evidence. If they really want to know what caused the person’s death, they will. Unless they(The Justice system) are not willing to