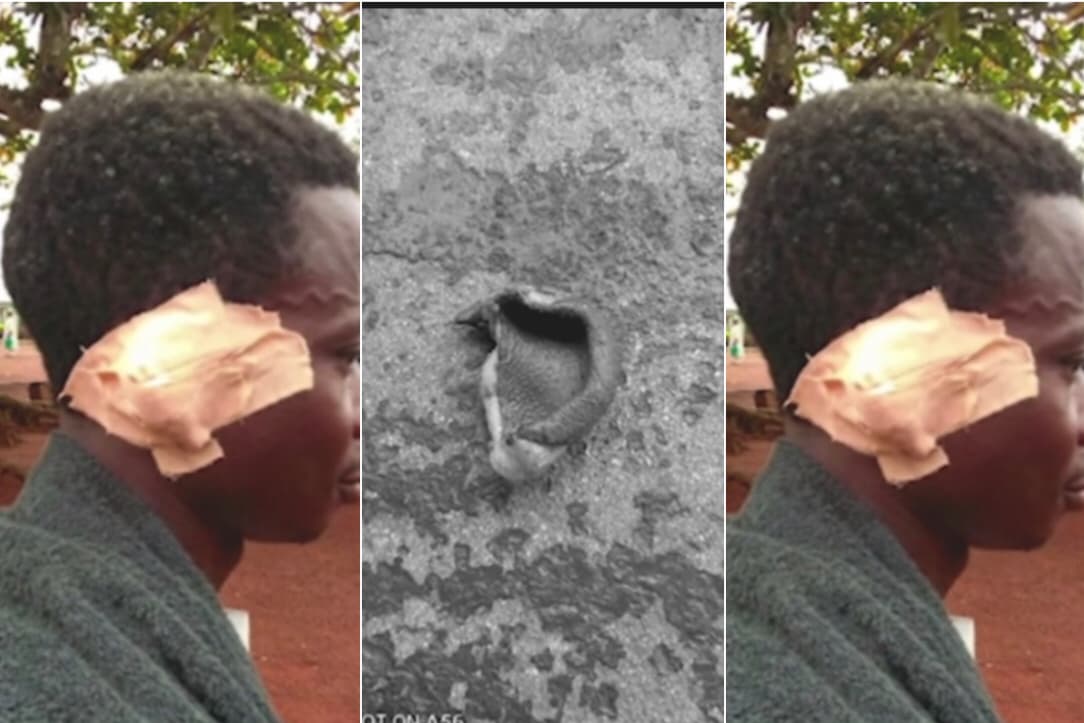 A man identified as Emmanuel Agbeko has reportedly bitten off the ear of his colleague due to a fight between them over weed soup.
The said incident happened in a town called Adadeintem in Assin South of the Central Region. The 32-year-old Emmanuel saw Isaac Atigah, Kwadwo, and Adjei preparing fufu and soup. However, he approached them to stop them from preparing the soup and the fufu.
In a Midday news on Angel FM, it was reported that while they pounding the fufu, Emmanuel saw the group of people adding weed to the soup and he decided to approach them and stop them from adding the weed. According to him, other children in the family cannot eat the soup if weed is added to the soup.

The interruption from Emmanuel turned into a fight where Isaac Atigah bit off the ears of Emmanuel Agbeko who is currently receiving treatment.

Isaac Atigah is currently in police custody after he bit Emmanuel’s ears off. However, during the interrogations at the police station, the suspect disclosed that he bit off the victim’s ears because he has manhandled his manhood.

Ah💔… lately boys can’t even have conversations, it just ends up in fights and arguments. This is bad charley , he has deformed the guy… the once whole person will be walking about without an ear… even if they sew it back, how good will it be

this one is mix feelings. Kwerh Isaac Atigah was probably on a high

Chairman doesn’t joke with his manhood so no weapon formed against it shall prosper, that’s why he bit the guy’s ears for touching and holding it

this weed they said it’s illegal nu , you want to kill someone because of that eiii. Asem w) wias3

It is very bad of the guy to bite his colleague’s ear simply because he prevented him from adding weed to the soup they are going to eat with kids being part. This is the reason why Ghana police and the court are always harsh on people caught with weed on them.
It clearly shows that the guy has being smoking and was high, so the least thing you’ll do against him, he will do everything to hurt you. He needs to be punished for deforming someone like this for preventing him from doing such a bad thing,

this one is mix feelings. Kwerh Isaac Atigah was probably on a high

The guy was really high cos how can you even make an attempt to add weed to the soup he knows clearly children are part of those who’ll be eating it.
It’s bad of him to bite the ears of that guy for being honest with him not to add weed to it for the sake of the children.

this weed they said it’s illegal nu , you want to kill someone because of that eiii. Asem w) wias3

Recently someone was jailed 10 years for possession of weed and how much more you that have bitten someone’s ear simply because he prevented you from using it.
He should forget about returning back home from prison when he’s eventually jailed. This world we’re in now I just don’t know what’s going on, today you’ll hear shocking news here and tomorrow you’ll hear another one there, why?.

he go turn Metusala for the prison

. He will probably rot in jail for doing this

The guy whose ear was bitten too I don’t understand him, why did you hold someone’s manhood? Is it yours or is yours missing and you’re suspecting the guy?

. That’s when he realized some self defends can damage

He taught he was doing self defense until his ear was no more​:joy:

Bro before you add an emoji to your sentence don’t forget the space you must give at the end of the last word to separate the emoji and the words. If you don’t do it that way, the emoji attached immediately to your last word will be in the test form.
Example of such errors(1) and it’s correction(2)

Thanks bro for the advice. I really appreciate